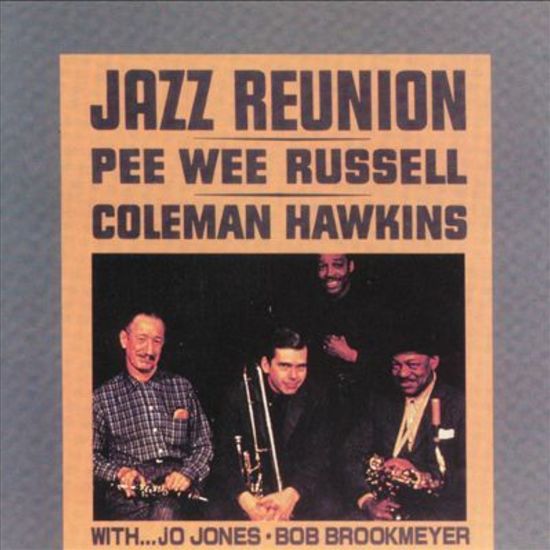 It is strange that two such individual musicians as Pee Wee Russell and Coleman Hawkins were kept apart for some 32 years but it is a fact that not since 1929 had they met in a recording studio. Pee Wee Russell’s unique, and sometimes derided approach was praised as ahead of its time, and cited by some as an early example of free jazz. Coleman Hawkins, at the time of this1961 Jazz Reunion record date dismissed any idea that Russell was now playing modern, claiming that he had always played that way. The greatly imaginative improvisations of Russell when at his best remain an inspiration to jazz clarinetists.

On this album the whole group move with an elasticity which only comes when exactly the right mood is attained by all the musicians taking part. Pee Wee plays with deep passion throughout and Hawkins was never heard in better blowing form than this. His virile, robust solos are as forceful as anything he recorded in his long distinguished career. Emmett Berry’s solos are models of tasteful improvisation. Brookmeyer displays a pretty turn of wit and builds his solos with ingenuity. With excellent arrangements by Nat Pierce and some lovely cymbal work from Jo Jones this really is a beauty.