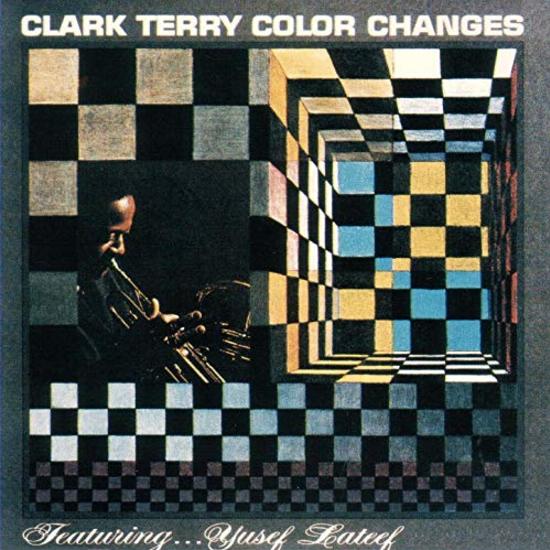 Possessor of the happiest sound in jazz, flügelhornist Clark Terry always plays music that is exuberant, swinging, and fun. A brilliant (and very distinctive) soloist, he gained early experience playing trumpet in the viable St. Louis jazz scene of the early ‘40s (where he was an inspiration for Miles Davis) and, after performing in a Navy band during World War II, he gained a strong reputation playing with the big band of Charlie Barnet (1947-1948), the orchestra and small groups of Count Basie (1948-1951), and particularly with Duke Ellington (1951-1959). Terry, a versatile swing/bop soloist who started specializing on flügelhorn in the mid-’50s, had many features with Ellington (including “Perdido”) and started leading his own record dates during that era. He recorded regularly in the 1960s including a classic set with the Oscar Peterson Trio and several dates with the quintet he co-led with valve trombonist Bob Brookmeyer.

This is one of flügelhornist Clark Terry’s finest albums. Terry had complete control over the music and, rather than have the usual jam session, he utilized an octet and arrangements by Yusef Lateef, Budd Johnson, and Al Cohn. The lineup of musicians lives up to its potential, and the charts make good use of the sounds of these very individual stylists. The material, which consists of originals by Terry, Duke Jordan, Lateef, and Bob Wilber, is both rare and fresh, and the interpretations always swing. Scott Yanow/AMG

Lacy, who is considered the first “modern” musician to specialize on soprano (an instrument that was completely neglected during the bop era), began to turn toward avant-garde jazz in 1965. He had a quartet with Enrico Rava that spent eight months in South America. After a year back in New York, he permanently moved to Europe in 1967 with three years in Italy preceding a move to Paris. Lacy’s music evolved from free form to improvising off of his scalar originals. By 1977 he had a regular group with whom he continued to perform throughout his career, featuring Steve Potts on alto and soprano, Lacy’s wife, violinist/singer Irene Aebi, bassist Kent Carter (later succeeded by Jean-Jacques Avenel), and drummer Oliver Johnson; pianist Bobby Few joined the group in the 1980s. Lacy, who also worked on special projects with Gil Evans, Mal Waldron, and Misha Mengelberg, among others, and in situations ranging from solo soprano concerts, many Monk tributes, big bands, and setting poetry to music, recorded a countless number of sessions for almost as many labels, with Sands appearing on Tzakik in 1998 and Cry on SoulNote in 1999.

His early dates (1957-1961) were for Prestige, New Jazz, and Candid and later on he appeared most notably on sessions for Hat Art, Black Saint/Soul Note, and Novus. Lacy, who had been suffering with cancer for several years, passed away in June of 2004. His legacy continues to grow, however, as various live shows from throughout his career are issued.