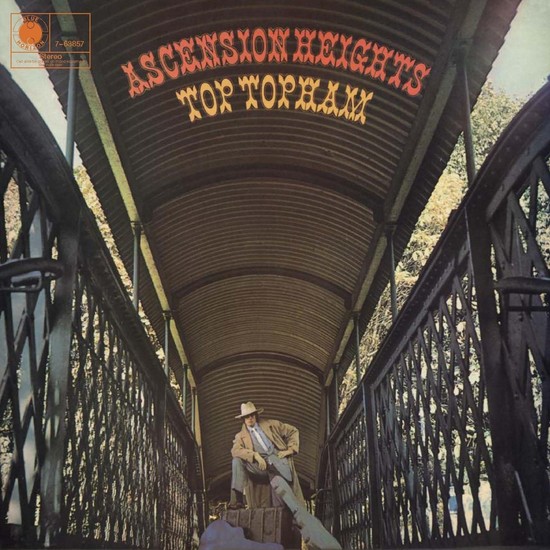 At the pimply age of 15, Surrey-born Anthony “Top” Topham stepped onto stage in May 1963 at the Eel Pie Island Club in Twickenham with his new blues-wailing band – THE YARDBIRDS. A few months later he was replaced with ERIC CLAPTON and after that a certain JEFF BECK and JIMMY PAGE also joined that volatile crew. When you consider what a staggering influence CREAM, BECK and LED ZEPPELIN have had on everything in rock then and now – it’s a damn shame that Top Topham got musically lost in the mix somehow and has never been given the catalyst credit he so deserves.

The album “Ascension Heights” has always been a £100+ vinyl rarity (I’ve seen only one copy of it in my life), so its reissue here is to be welcomed. But it has also divided Blues purists for years because – for a blues label release – it’s a slightly strange record! Firstly it’s entirely instrumental – and not in a blues way either. It doesn’t seem to quite know what it is. One minute it has the playfulness of Django Reinhardt jazz noodlings on “Spider Drag”, the next minute it’s Sixties Chet Atkins on “Globetrottin’”, the next second its funky Blood, Sweat and Tears without the vocals on the brass filled “Mini-Minor-Mo” (a personal favourite and one that funky rock enthusiasts should check out pronto). It also features PETE WINGFIELD on Piano. There are even times on “Hot Ginger” where it sounds like a soulful version of Fleetwood Mac’s debut album! A heady mix to say the least! It’s a varied album, daring in its choices and remember – most are original songs by Topham. “Ascension Heights” is a grower that bears repeated listening.