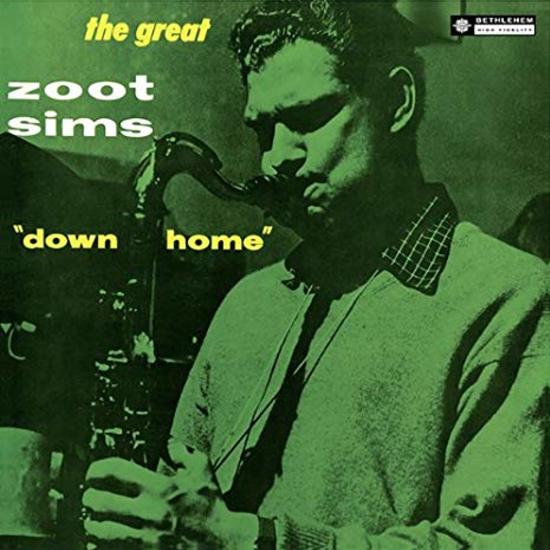 Tenor saxophonist Zoot Sims recorded on a regular basis as a leader for most of 45 years, and virtually all of his many sessions are worth acquiring. Sims’s Bethlehem date also gives one a look at the great pianist Dave McKenna in his early days, along with bassist George Tucker and drummer Dannie Richmond. Sims mostly explores standards from the swing era (including a rare version of “Bill Bailey”) on this enjoyable and consistently swinging set. Scott Yanow

John Haley “Zoot” Sims had built a solid career by the time he recorded Down Home, although not one rife with innovation. Heavily influenced by Lester Young, Sims combined a heavy dose of West Coast cool and plenty of swing to create a style that was always accessible. None of the songs here is a Sims composition (he rarely wrote his own music), but just listen to him go on “Bill Bailey,” for instance, using all of his wiles to draw you in to the tune. With Dave McKenna on piano, George Tucker on bass and, taking a break from his work with Charles Mingus, Dannie Richmond on drums, the rhythm section laid down the perfect beat for Sims to glide over.

By trusting its staff and artists to make their own creative decisions, to experiment, and thus to flourish, Bethlehem actively helped create and not just document a whole and diverse era of Jazz music.In1960, when this album was recorded, was one of Zoot Sims’ most productive years. The performances here are recognised as being the masterpieces of Sims’ middle period.