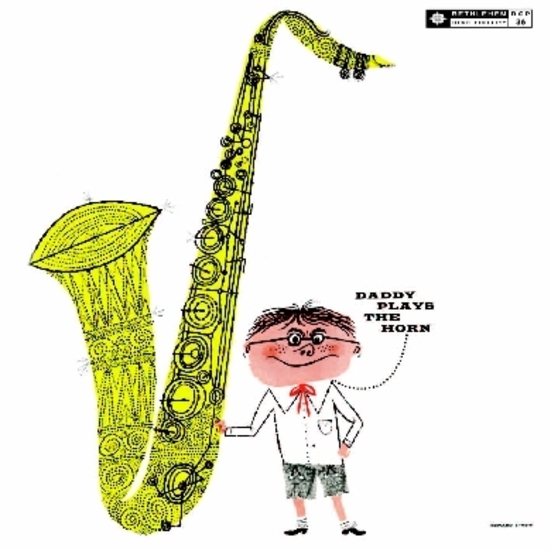 The label distinguished itself by giving artists creative control of their projects and presented albums of rather cutting edge graphic design. Its legacy is a lengthy discography that freshly and ambitiously captured and preserved an era of truly amazing music including West Coast Cool Jazz, East Coast Bop, and Vocalists. For many of the artists, their first or greatest recorded work happened at Bethlehem. By trusting its staff and artists to make their own creative decisions, to experiment, and thus to flourish, Bethlehem actively helped create and not just document a whole and diverse era of Jazz music.

During a period of Dexter Gordon’s (tenor sax) life — when he was deep in the throws of chronic drug addiction — the artist was miraculously able to reignite his career during the latter part of 1955. After several years of being out of the spotlight, Gordon resurfaced on the Big Apple-based indie Bethlehem imprint with the half-dozen sides that comprise Daddy Plays the Horn (1956). While the support team provides Gordon top-notch contributions throughout, it is unquestionably Drew who offers the most in terms of active interaction and his prominence can not be overstated. Nowhere is that as noticeable as the good-natured interaction heard on the disc’s opener, the Gordon-penned title composition “Daddy Plays the Horn.” In fact it could be argued that Drew enhances the tenor to the point of practically being a co-leader. The update of Charlie “Bird” Parker’s bop standard “Confirmation” is taken at a steady mid-tempo pace, allowing plenty of room for the participants to have their say and not get in the way of the melody. Gordon seems considerably more relaxed and comfortable as he spreads line upon line of inspired improvisation.

Drew is once again a real treat to hear briefly taking charge of the rhythm section. The pair of ballads on Daddy Plays the Horn are nothing short of stellar and stand as simple, emotive expressions unto themselves. “Darn That Dream” embraces the warmth of Gordon’s tenor as his sensual phrasing leaves just enough space for Drew to sonically bridge the gap with his own unhurried and stylish chords. The generically monikered “Number Four” is anything but ordinary. The Gordon original jumps right from the opening and the ensemble lets loose with equally solid licks beneath his cool tone.

Drew gets in the driver’s seat missing nary a measure to reveal what could easily be his most tasteful contributions to date. The same can be said of bassist Vinnegar, who is briefly spotlighted on an efficient (if not somewhat sparse) solo. “Autumn in New York” — the album’s other essential ballad — is proof that despite Gordon’s addiction, he had retained his singular and precious sense of lyricism. Indeed, the Great American Songbook entry has rarely been permeated in such a meaningful way. The seamless transitions between Gordon and Drew are further evidence of their undeniable bond. Saving what may be the best example of the gathered instrumentalists flexing their respective be-bop muscle, “You Can Depend on Me” rounds out the platter with a bang.