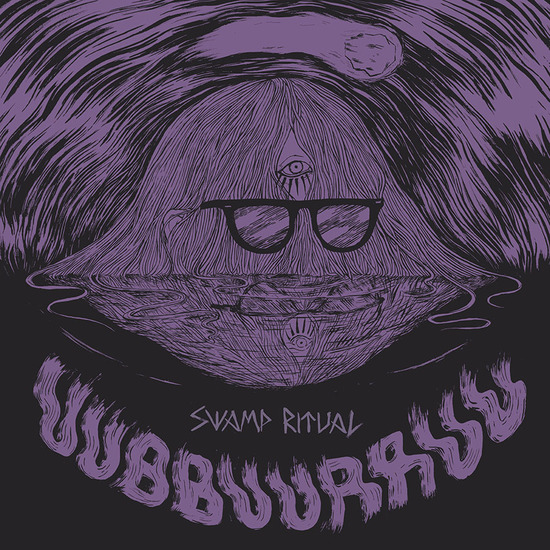 Here we go for a beautiful split album by two Montreal / Canada based acts with a close connection as it seems and a common love for psychedelic sounds and space rock despite their different turns on the same thing. It is no miracle that you find UUBBUURRUU front man Joey Napoleon being in both acts. While UUBBUURRUU have chosen a rather laid back and melodic pop psyche route just with slightly more edgy guitars he kicks off into a fuzzed out acid punk inferno with EL NAPOLEON. Dark and gloomy garage beat with dirty riffs and even dirtier and simmering hot melodies is the lowest common dominator here and be sure it is you as the listener who gets dominated. This will certainly appeal to all those who still live in the yesteryear some 46 years ago when beat became rock and songs became twisted, uncontrollable freak outs due to hordes of proto punks going nuts on topics like the ongoing Vietnam War or sexual liberation. UUBBUURRUU may have the more freaked out name though. Their music consists of straight compositions with very striking melodies that may sound familiar to one somehow but really do their work to drag the listener onto a colorful trip. EL NAPOLEON on the other hand work with the same kind of firing harmonies and vocal lines but give them an extra buzz with their guitar eruptions that go further than your average sixties garage rock (which I love) and reach spheres of rage only MC 5 or THE STOOGES would have dared to touch. Eastern flavored guitar leads enhance the psychedelic mood to its maximum. All this is certainly very well played but it might not appeal to fans of clean digital sounds as the earthy and often dirty production is the icing on the cake and makes both acts come as vibrant as music can and should be. I would not mind making love to a sweet soul sister while cranking up this gem so it is really that hot and groovy. Fans of BABY WOODROSE, SPIDS NÖGENHAT, early MONSTER MAGNET and oldies like THE SEEDS, THE THIRD BARDO and tons of English pop psyche acts like TOMORROW or APPLE will enjoy this split album. Cheers to Canada, well done, boyzzz!!!!!