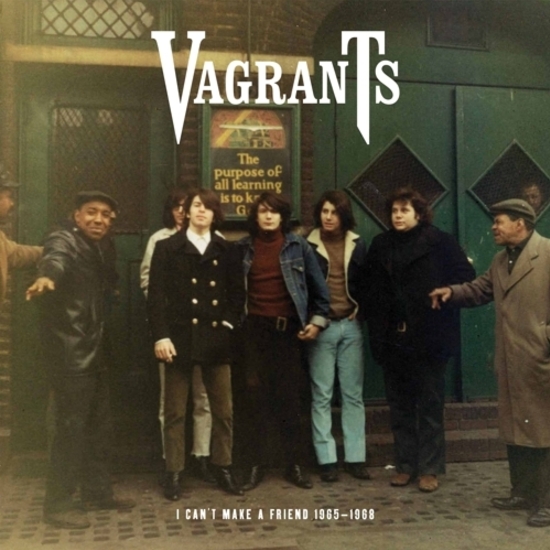 East Coast rockers from Queens, New York, the Vagrants are as OG as they come. Admired from across the Forest Hills High School cafeteria by future members of the Ramones, they ripped across the city and state with ecstatic abandon and an explosive stage show. They pissed off Bill Graham on a mini West Coast tour and were told they’d never play there again. Full of damage and pure dynamics, the Vagrants provided the blueprint for early punk. They invented their own timeless interpretations of soul and contemporary rock smashes including their infectious take on “Respect,” eventually immortalized on the original Nuggets compilation in 1972. Shit, they may even be responsible for helping to push a young Hammond B3 rocking Billy Joel (then in the Hassles) into the big league. Not to mention a little Mafioso mayhem thrown in for good measure (steal, beg or borrow the album to read an extensive set of deep liner notes from Ugly Things’ Mike Stax on the subject). But forget the tales of these real rock Rumble Fish, it’s the music that tells the story. 12 slabs of groovy garage, propulsive psych, and primitive proto-punk, Light In The Attic score another coup with I Can’t Make A Friend 1965-1968.

With the aforementioned annotation by Stax, I Can’t Make A Friend 1965-1968, is set for a 2011 release on CD, 180 gram LP, and Digital Download with re-mastered audio courtesy of Dave Cooley (Elysian Masters) and booklet/jacket graphic design featuring unseen photos (courtesty of Vagrant vocalist Peter Sabatino) from Strath Shepard (Pacific Standard). It’s this handcrafted effort (along with the usual Light In The Attic attention to detail), that makes this a must purchase (and worthy of precious shelving space). The Vagrants (on record) have never sounded better! File right before the Velvet Underground in your record collection (re: era, geography, and alphabet). NYC!

Forget contemporary carbon copies, here’s a vinyl slab of the real thing. With perfect production by Felix Pappalardi and the monumental guitar of pre-Mountain Leslie West, the Vagrants will rip your mind apart and take you off-the-wall at your local cave-stomping discotheque, almost fifty years after their initial recording. The songs are that powerful. Forget the masses, this is music for the heads. It’s the sound of five New York kids with big dreams: Roger Mansour (drums), Peter Sabatino (vocals, harmonica, tambourine), Jerry Storch (organ, vocals), Larry West (bass, vocals), and Leslie West (guitar, vocals).“I Can’t Make A Friend”? Surely some things have changed for the Vagrants, right fellows?