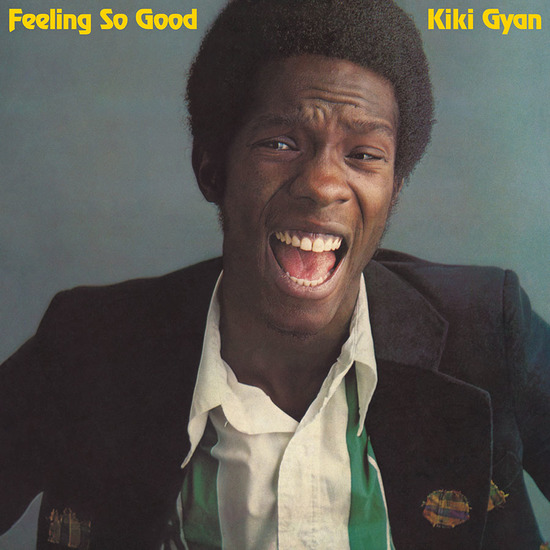 First time reissued on CD! This is in fact more than just a rare record and definitely more than just a vinyl share for insatiable collectors who only judge a record by it’s monetary value. This is a prime example of overflowing talent coupled with a simmering passion for music and the hunger for life right at the moment. The story begins on Jue 7th 1957 in a small Ghanaian village where Kofi Kwarko Gyan, nicknamed Kiki, was born into a middle class family. Soon his talent as a musician began to show when he started taking piano lessions by the age of 5 and went professional by the age of 12. He dropped out of school shortly after and began living a life on the road with regional Ghanaian bands. One trip abroad took him to London in the early 70s where his career received a giant push at the age of 15. He joined afro rock legends OSIBISA in 1972 as their new keyboardist after his predecessor had left the band. By the mid 70s Kiki Gyan had played with OSIBISA to giant audiences allover the world and met personalities from the international music scene such as Elton John and Mick Jagger. He was not only a steady keyboardist for OSIBISA but also a very popular session man for fellow African bands and musicians, among them OFEGE from Nigeria. He released a couple of solo albums and we take a closer look now at his second effort from 1979, “Feeling so good”. The music keeps what the title promises as this is a delightful example of joy manifesting in music. Everything is bright here, the grooves are complex and powerful, yet always accessible. The harmonies enchant you with their friendly approach. The African sun shines from each note played on this record. Gyan mixes Western disco sounds, funk, African traditional chants and reggae sounds into an ever flowing groove music that has lot’s of melody and mesmerizes by the swirling percussion patterns. “Feeling so good” is an equally physical and spiritual affair and contains six lengthy tunes. Tunes that live from the tight interplay of all instruments, the crisp, clear and powerful production and a wild and steaming atmosphere. Kiki Gyan was on the step of entering the ‘Hall of Legends’ like Stevie Wonder did, to whom he often got compared to. His legacy remains huge, not only for African music but for all black music that ruled the early disco scene in the 70s and whose popularity is still at full blossom. Next to Fela Kuti and Geraldo Pino, Kiki Gyan can be called a true force in African pop music of the 70s!