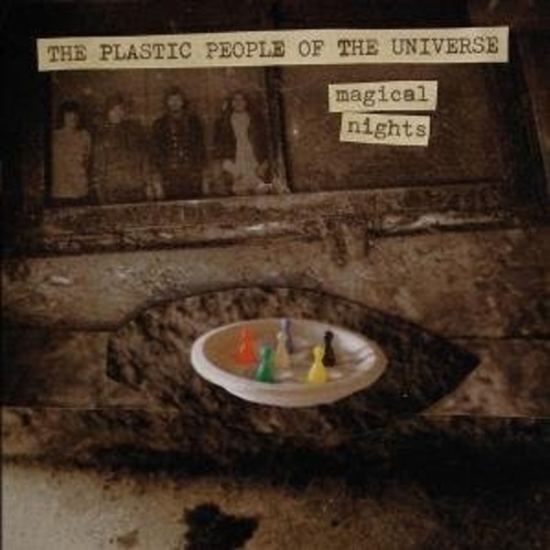 Plastic People Of The Universe

The Plastic People of the Universe (PPU) are the definition on underground music. Formed in 1968 with bands like The Velvet Underground, Frank Zappa and The Fugs as references, they progressively shifted towards more experimental music forms. In 1976 they were jailed by the Czechoslovak communist regime solely because they dared to play their music for a bunch of long-haired fans, indirectly causing an immense political effect for the years to come. This collection brings together their best tracks from nearly two decades.

The band was formed in autumn 1968 in Prague by teenagers and former schoolmates bass guitarist Milan “Mejla” Hlavsa and guitarist Jirí “Premek” Števich. They teamed up with vocalist and clarinetist Michal Jernek and drummer Pavel “Eman” Zeman. Their increasing popularity attracted attention from Ivan Martin Jirous, until then the artistic mastermind of the legendary Primitives Group. He secured them a professional license and equipment from a state-owned agency. Eventually, another ex-Primitives, Josef Janícek, joined on guitar (later he switched to keyboards).

Since the invasion of the Warsaw Pact armies in August 1968, the Czechoslovak communist regime was continuously tightening the reins on most segments of the society, and particularly on the West-influenced youth culture. By 1970, the PPU had lost their agency support and the state-owned instruments. Jernek and Števich quitted, replaced by guitarist and violinist Jirí Kabeš and the Canadian vocalist Paul Wilson.

In 1973 Hlavsa, Janícek and Kabeš were joined by saxophonist Vratislav Brabenec. As an experienced jazz musician, Brabenec caused a further major shift in the group’s orientation, from relatively straight progressive rock towards more experimental music forms. They also ditched the English lyrics in favour of original Czech poems, supplied at that time particularly by the underground philosopher and poet Egon Bondy. During the winter of 1974-75, the PPU clandestinely recorded their first “album” on archaic equipment in the unheated rooms of the Houska castle. Parts of it were released in France as the “Egon Bondy’s Happy Hearts Club Banned” LP in 1978.

In 1976, dozens of members from the underground community were arrested by the secret police, including the PPU musicians, and several of them were put on trial. Brabenec and Jirous were sentenced to eight and 18 months in prison. That trial gave the impulse for playwright Václav Havel and other intellectuals to publish the Charter 77 document in January 1977. Despite all the hurdles, the PPU kept on writing new material, which they occasionally performed and recorded at Havel’s private farm. The persecutions by the secret police continued, and in 1982 Brabenec was forced to emigrate. Although the PPU home-recorded several albums through the 1980s, after 1981 they did not play before an audience until their break-up in 1988.

After the Velvet Revolution of 1989, the PPU briefly reappeared in 1992 for a few gigs, featuring the original founding members. In 1997, after being asked by Václav Havel (then Czech president) to perform at the 20th anniversary of Charter 77 at the Prague Castle, the classic 1978-1982 line-up eventually decided to reunite. And despite Hlavsa’s premature death in 2001, they continue touring successfully to the present day.