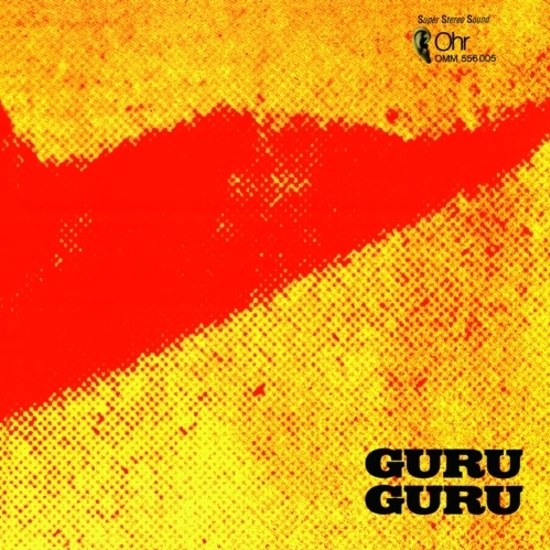 A brief version of the Guru Guru story is told in the rare OHR label LP sampler “Ohrenschmaus”: “Formed in the summer 1968, when, as acoustic musicians Mani Neumeier and Uli Trepte (up to then Free jazz) said, ‘everyone bought a strong amplifier.’ The album text goes on to note that: “There are many groups who practice with acoustic or electronic instruments a spontaneously changing music, which is characterized as improvisation. Actual improvisation, however—like for example with the Guru Guru—is not straight ahead. They orient themselves at agreed upon structures.” Given freedom by the freest label of the day, free jazz drummer Mani Neumeier and bassist Uli Trepte and guitarist extraordinaire Ax Genrich let the acid and the musical innovation flow. Guru Guru were genius, and “UFO” (released in 1970) was their first testament.

Like any truly groundbreaking and important album, “UFO” makes one ask oneself bizarre questions such as, “could the members of Joy Division have heard this album?” or induces one to make emphatic statements like “so this is where Throbbing Gristle got the idea.” This is an album which is über-psychedelic, proto-industrial, free in every sense. Or as one writer said, “A high water mark for acid psychedelia that possibly cannot be beat.” Our Lion Productions edition comes with a 20-page booklet which contains band info, a history of Rolf Ulrich Kaiser and OHR Records, and an OHR label discography.