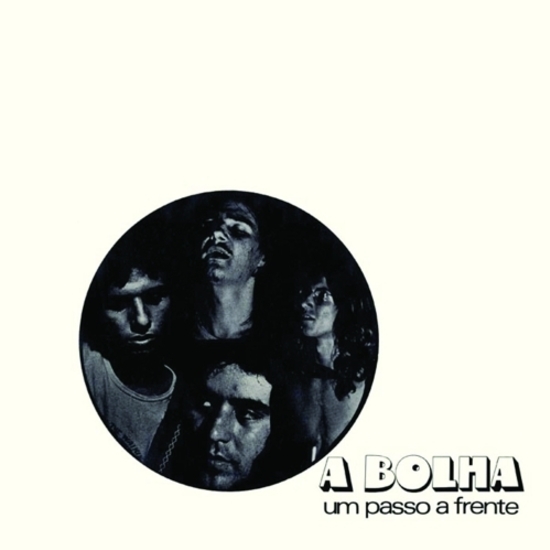 Brazilian band the Bubbles became the toast of the underground Rio de Janeiro scene, backing Tropicalist singer Gal Costa’s residence at the Sucata night club in 1970. They won the “Best Band of the Festival” award at the VII FIC of 1971 (International Festival of Songs), the same year they appeared on Leno’s “Vida y obra de Johnny McCartney” album. After venturing to England to attend the Isle of Wight Festival, they decided to experiment with a heavier sound, more akin to UK bands of that era (Deep Purple, Cream, King Crimson, Humble Pie, with a little Beatles’ “White Album” in for good measure) than that of their Brazilian cohorts. A name change to A Bolha later, still loaded with verve and swagger, fueled by drugs, they recorded their first album, which has secured a permanent place as one of the best hard psych rock albums to ever emerge from South America.

The LP, “Um Passo a frente” (A step forward), was released in 1973 by the Continental label, in a gatefold cover which was quite luxurious for the era. This masterpiece, now impossibly hard to find as an original, certainly made a name for A Bolha in the pantheon of 1970’s Brazilian rock. But success in the early 1970’s was not like it had once been in the old Jovem Guarda or Tropicalist days, when bands had weekly TV shows to help them become well-known nationwide—and eventually, worldwide. In other words, the meager abilities of Continental to promote the album made it a collector’s item, not the fate a band would actively seek for their recordings. Luckily, we at Lion Productions are able to present these recordings to the world all over again, with the additional benefit of a 20-page booklet with band history, photos, and comments on the songs by band leader Renato Ledeira. Includes both sides of the band’s infamous hard-rocking 1971 single as bonus tracks.