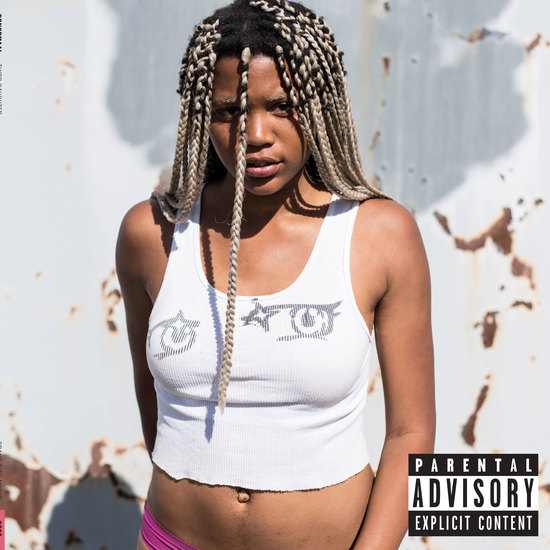 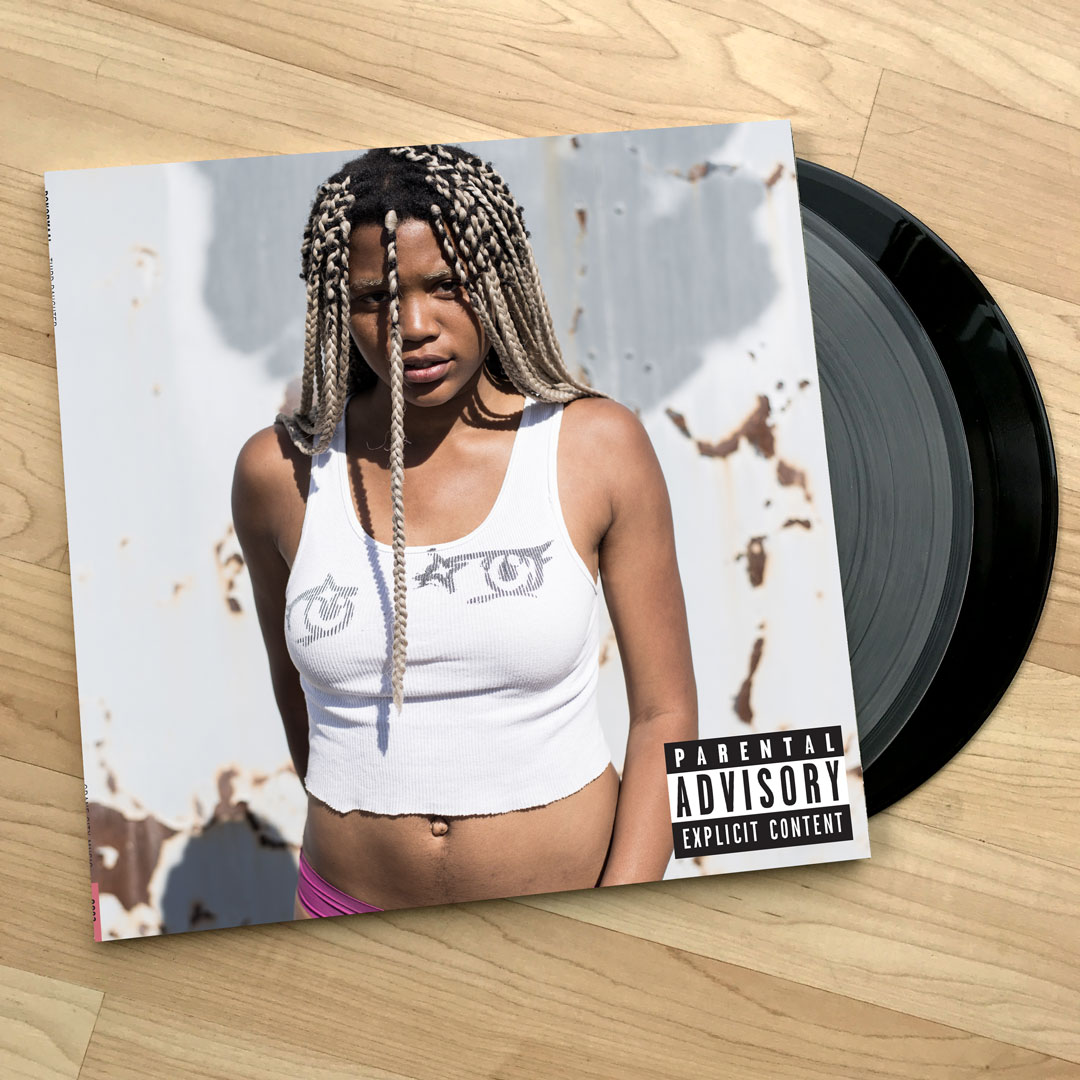 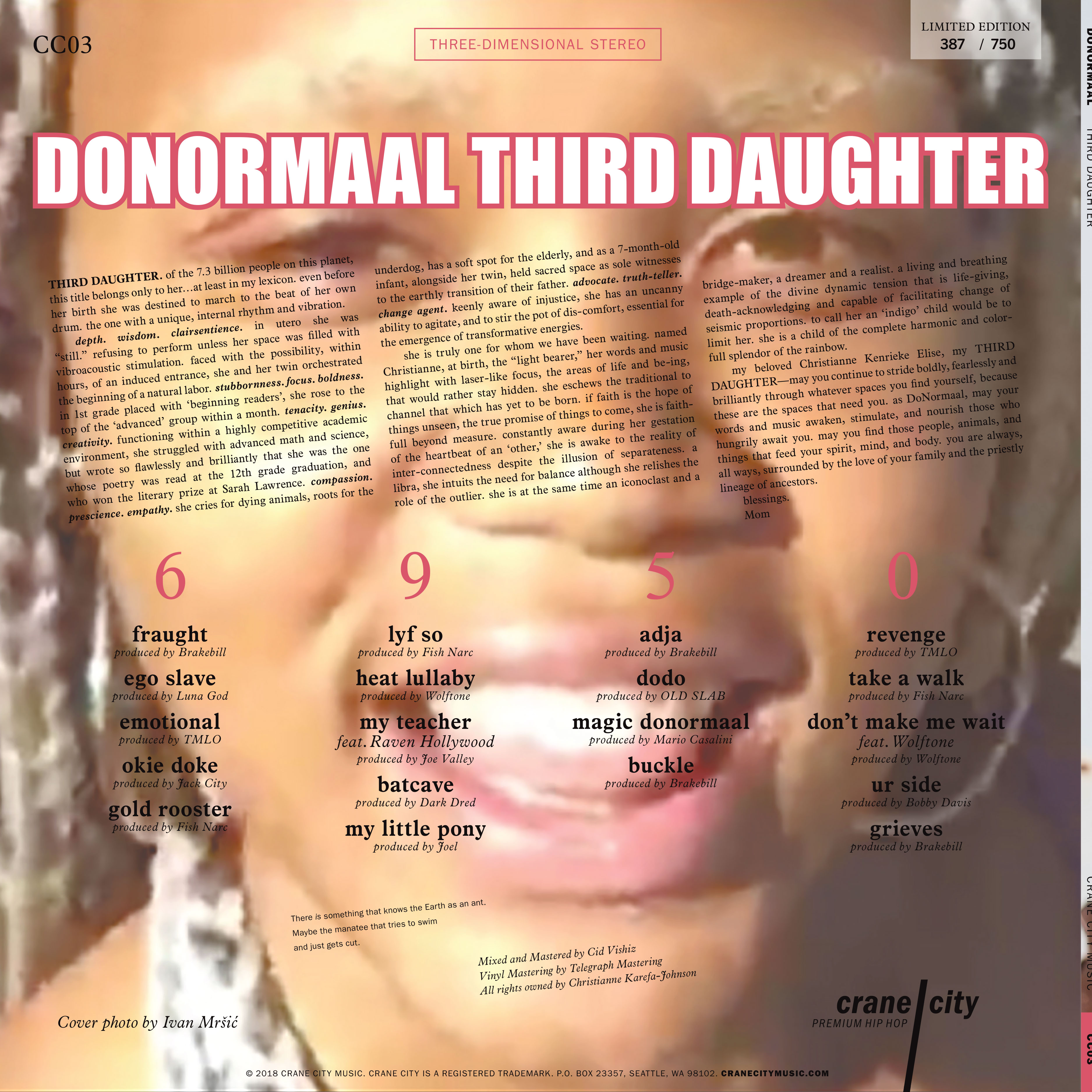 SoundCloud sensation “Third Daughter” by Seattle hip-hop artist DoNormaal is finally available for the first time on vinyl. This 19-track project became a runaway success in the summer of 2017 when it was first released independently online. Since then, it has amassed accolades and album-of-the-year nods from national and local publications such as Bust magazine, Vice, The Fader, i-D, KEXP radio and The Stranger.

“Third Daughter” has now been pressed on limited-edition, deluxe double vinyl from underground hip-hop label Crane City Music. This first pressing is limited to 750 clear and black vinyl copies, each one individually numbered, in a package designed by DoNormaal herself—with liner notes written by her mom.

“DoNormaal’s voice is unique: it slurs, falls, and bubbles out of her mouth like a water fountain. It’s simultaneously creepy and vulnerable, intimate and jarring. Beneath the trap drums and SoundCloud synths, the free flow of confessions, memories, regrets, odes, and anxieties slowly becomes something monumental: the portrait of a young woman in flux.” —i-D magazine

“’Third Daughter’ plays unlike anything else we’ve ever heard: the soundscape is a singular blend of hip-hop, grunge, nursery rhymes, layered melody, horror-core, electronica, and southern trap. In a single song, she’ll worry about her sisters, bemoan the oppression of capitalism, examine her place in society as a woman of color, and fight her depression, all with a secret smile.” —Vice.com

“’Third Daughter’ is a special record, a crazy combination of psychotherapy and flexing. DoNormaal wins at games nobody else is playing.” —Mass Appeal

“DoNormaal’s music pulls together driven, rhythmic vocals with swirling, abstract vibes with a drop of Seattle grunge in there, too.” —The Fader

“One of Seattle’s most electrifying talents. The music sways against DoNormaal’s sometimes woozy, sometimes chant-like flow, against a backdrop of unpredictable rhythms and spacious, pensive beats.” —KEXP radio

“ALBUM OF THE YEAR. An ambitious artistic declaration of purpose: Stealthy, funny, complex, and unwieldy. This is an LP that wants to be heard. And you definitely want to hear it.” —The Stranger

In her own words, DoNormaal describes the album as a fairy tale of “a quiet black princess held hostage by the internalized shame of the world." Indeed, few albums have as much to say about our present, turbulent times—these years of protests and rebellion, of identity, race, and responsibility. Blistering with confidence and clarity, this remarkable record demonstrates why DoNormaal is one of the brightest lights in hip-hop today.