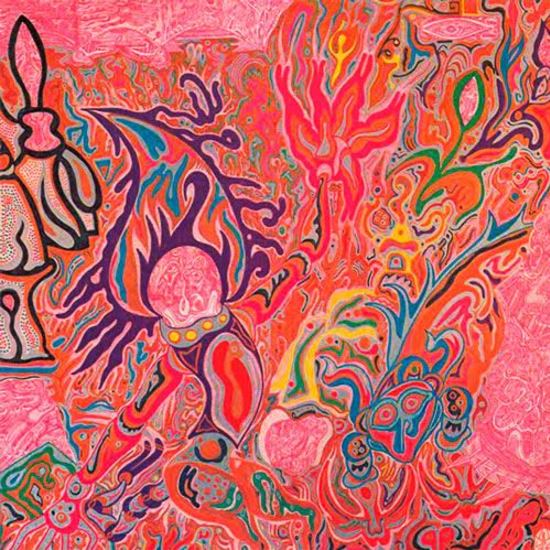 Formed by multi-instrumentalists Hans Reffert (‘Flute’) and Hans Brandeis (‘Voice’) in Mannheim in 1969, the Flute & Voice duo discographic debut was issued on Pilz in 1970. It featured a progressive mixture of ethnic influences and accoustic experimentations making it one of the most sought after pieces from krautrock’s most underground scene. Hans Reffert was already considered one of the best guitarists in the Mannheim/Heidelberg area, having played banjo since the age of 12 and then studied with guitar master Siegfriend Schwab, and when he joined forces with Hans brandeis the two experimented with various instruments and voices to find their sound. Imaginations Of Light features a wide range of different tools to make a whole sound spectrum that melts psyched out folk with experimental jazz and world music. Flutes and voices, obviously, are joined by different types of guitars (acoustic, electric, dobro…), electric bass and sitar, all performed by the two Hanses, plus cello, violin and moroccan percussions courtesy of guest musicians Clemens Schuster (cello), Dorle Ferber and Julia Gallwitz (violins) and Guru Guru’s Mani Neumeier (percussions – Reffert himself played some years in Guru Guru during the eighties).

Their second album, Hallo RabbitI, originally recorded in 1973, only saw the life as a test pressing that, at the time, was rejected by BASF for release. And so it remained in the vaults until Jack Wieber Records issued it on CD in 1995 as part of a 2 album CD (along with Imaginations Of Light). It shows a progression that some sources have noted to be a more direct and clearly structured sound, but obviously without any concessions to their principles of experimentation in sound, use of different instrumental textures, and their rich ethnic background.

Krautrock meets world music, heady psychedelic jazz, ethnic explorations. As you can imagine, the band’s sound is unique and unlike anything else you’ve heard, but it will appeal those into artists such as Magic Carpet, Oriental Sunshine, Saddhu Brand, Mick Softley’s Sunrise LP, Bobby Callender’s Rainbow LP, Sagram, a.o.

Fans of Magic Carpet, King Crimson’s In The Court Of The Crimson King, Third Ear Band, Kalacakra, Oriental Sunshine, Bobby Callender, Clem Alford, Kali Bahlu or the “sitar side” of Popol Vuh will enjoy this one!

The Wah Wah edition is limited to only 500 copies, housed in the original psychedelic gatefold cover originally drawn by Hans Reffert and expanded with the inclusion of their second LP, Hallo Rabbit, issued in vinyl for the first time ever!