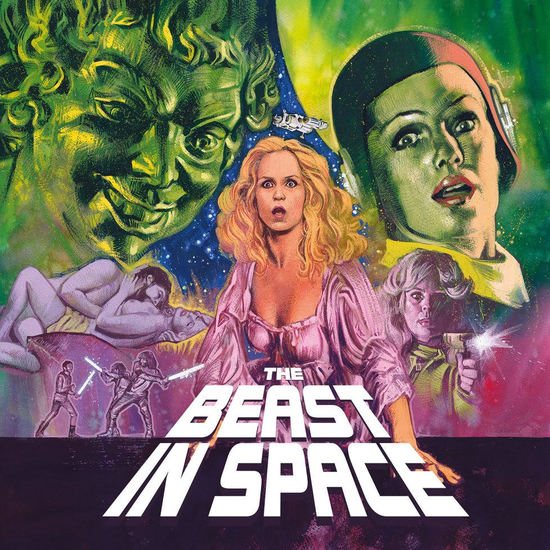 Borrowing heavily from Walerian Borowczyk’s THE BEAST (La Bête), most notably its sexy b-movie seductress Sirpa Lane, along with elements of STAR TREK, CALIGULA, and even STAR WARS (light saber battle, anyone?), this treasure trove of trash cinema is truly a sight to behold. Throw in a plethora of hardcore stock footage inserts, including a loving pair of amorous horses (be sure to experience the XXX-rated version), this heavily scotch-taped piece of sleazy celluloid also features one of the genres finest electronic soundtracks. Veteran Italian composer Marcello Giombini, credited in the film as Pluto Kennedy (best sci-fi pseudonym ever?), delivers a brilliant synth and effects-heavy score that was not only fitting of the outlandish images on the screen, but also clearly influenced by Wendy Carlos’ A CLOCKWORK ORANGE synth work. Who better than Giombini to deliver the appropriate soundtrack to an intergalactic struggle which somehow ends up with a giant well-endowed space faun chasing Sirpa Lane around an extraterrestrial landscape. This score will surely enhance your auditory senses during your next space sexcapade…but be forewarned, dear friends – you never know who (or rather, what) might pop up.