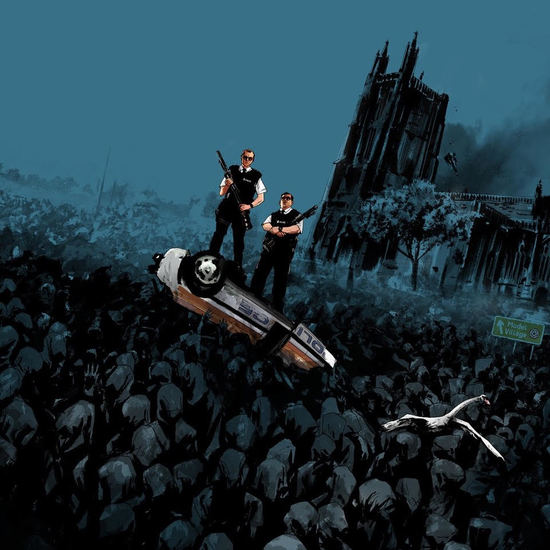 Edgar Wright’s sophomore film turns 10 years old this year, and we are honored to continue our celebration of his iconic film trilogy with the premiere release of David Arnold’s score to HOT FUZZ.

Never before released in its entirety, David Arnold’s score for HOT FUZZ plays it straight. The world of Nicholas Angel (Simon Pegg) and Danny Butterman (Nick Frost) is filled with stylized shoot-outs, colorful characters, and rapid-fire comedic beats; the music of HOT FUZZ takes the sincere approach. It brings the heroes (and their many, many villains) into the action films that eventually crash headfirst into the peaceful idyllic village of Sandford.

The title track, ‘Theme from Hot Fuzz,’ feels like a retro futurist version of a ’60s cop show – all urgent beats and huge orchestral flourishes that make you feel like you are in the action. ‘The Hot Fuzz Suite (Hotter and Fuzzier)’ is 23 minutes of utterly spellbinding music which travels the path from beautiful Spanish guitar flourishes to Arnold’s signature orchestral techno stylings. David Arnold went back to the master tapes for us on this and pieced the entire soundtrack together; both David and Edgar were involved in the approvals.

Featuring original artwork by Jock, continuing his Cornetto Trilogy series (with companion artwork to his previous take on SHAUN OF THE DEAD), mastered for vinyl at Air Studios UK.