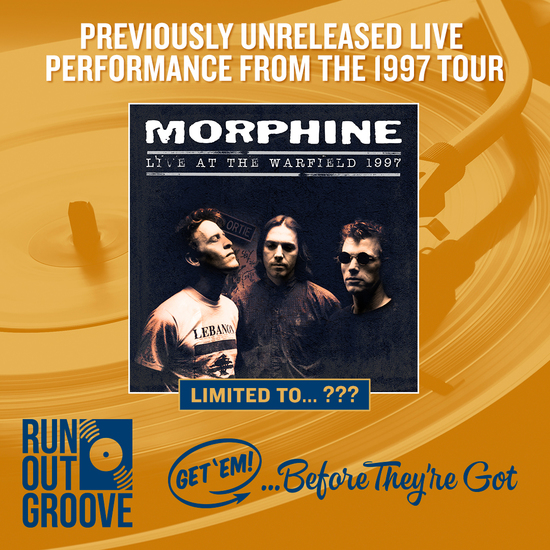 One of the most unique, original and unusual rock bands to burst onto the alternative scene in the 90s, Morphine was originally formed by vocalist/bassist Mark Sandman, saxophonist Dana Colley and drummer Jerome Deupree (later replaced by Billy Conway) in Cambridge, Mass in 1989. They expertly combined blues, jazz and rock elements into a very distinct style, anchored by Sandman’s deep, crooning, beat-style vocals. Rather than having an electric guitar as the focal point like most rock bands, the trio’s sound was built around Sandman’s two-string electric bass (often deployed with a slide) and Colley’s growling, baritone sax which they dubbed as “low-rock.”

The band enjoyed critical acclaim but saw mixed results commercially. In the States, they were embraced on public and college radio and MTV’s 120 Minutes but received little to no support from commercial rock radio or other music TV programming. They did enjoy much higher profile success overseas, especially in Belgium, Portugal France and Australia where they were featured on music television programming frequently and filled much larger venues.

After five studio albums and extensive touring, Morphine disbanded after Mark tragically died of a heart attack performing on stage at the Giardini del Principe in Palestrina, Italy. Surviving members have soldiered on in various incarnations, the most recent being the Vapors of Morphine that will be on tour through the summer of 2017.

Morphine was an incredibly dynamic and highly improvisational band in concert, yet released only one live album in their career. Live At The Warfield 1997 will right the ship by shedding light on a fantastic live rock n’ roll document that has gone unheard for 20 years — and Mark Sandman was a stickler for fidelity of their documented live performances so this music was expertly recorded showcasing amazing room ambience.