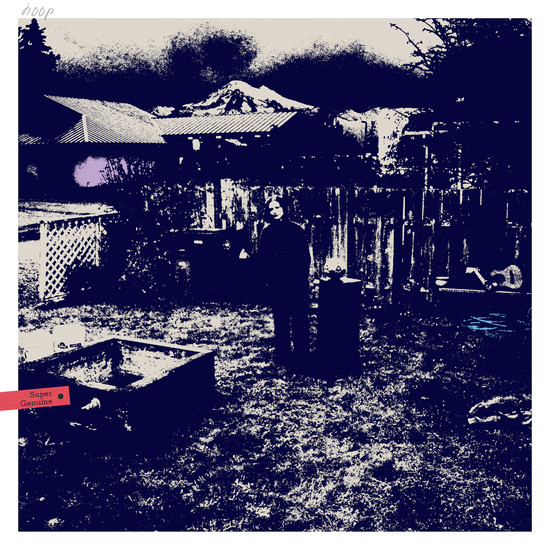 Music fans are thirsty for songs that help them process their frustrations with modern relationships. Super Genuine, the debut from Seattle four-piece Hoop, is a soft rock album for people who are sorting out unhealthy power dynamics, whether it’s with a friend, a partner, a family member, an authority figure, or the dystopian reality we all live in.

Hoop began as a recording project between songwriters and multi-instrumentalists Caitlin Roberts (Autococoon) and Nich Wilbur (Hungry Cloud Darkening) at Wilbur’s studio The Unknown in Anacortes, WA, while Roberts was living in town for eight months in 2014. The songs they created could only have been made in this pensive small-town environment. Wilbur’s minimalist taste and Roberts’ knack for melody merge to create a sound that is equal parts precise and soft. The recording exhibits sparse yet driving instrumentation and calm distortion, iced with Roberts’ moody, deliberate vocal performance, and Allyson Foster’s (Mount Eerie, LAKE, Stephen Steinbrink) hi-fi ear-candy vocal cameos. Super Genuine is grunge nostalgia augmented by the emotional intelligence of a 21st-century feminist and the sensibilities of a skilled producer.

‘Super Genuine’ begins blithely with the juicy alt-rock of “Marlin Spike,” which eases into the lightweight riff of “Good Dregs,” and then enters “Baseboards,” a sprawling power ballad in which Briana Marela (appearing courtesy of Jagjaguwar Records) delivers a nearly-a-capella drone outro where she speaks of an isolating intimacy: “You hold me / in a way that / pushes me / away.” By the end of the first half of the record, the emotive undercurrent has only tugged at the listener’s toes. The songs on Side B are deeply personal and startlingly vulnerable. The arc of the album details Roberts’ struggle to trust her instincts, stand up for herself, and be authentic in a verbally abusive relationship.

When Roberts moved away from Anacortes back to her larger community in Seattle, she found herself in a loving family of femmes in a warm and fiery house called the Womb Room. Housemates Leena Joshi (Sick Sad World) and Pamela Santiago (Gar Pal) quickly joined on drums and bass, bringing the album to life in a visceral way, playing parties and all-ages venues, often bringing audience members to tears, with new collaborative compositions written by the trio propelling the mix. Inge Chiles (Ings) joined Hoop after seeing them play and being moved by the songs; now, with the record out in the world, the foursome is poised to help people process their complex emotions on a much larger scale.