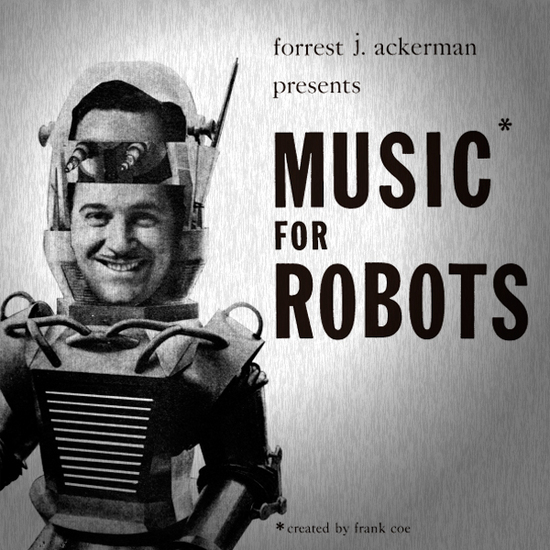 Forrest James Ackerman was THE ultimate American science fiction expert. He was a magazine editor (the man behind Famous Monsters Of Filmland), a science fiction writer, a literary agent (he represented authors such as Isaac Asimov, Ray Bradbury or L. Ron Hubbard, a.o.) and an avid collector of genre books and movie memorabilia.

Frank Allison Coe was a famed sound effects editor in Hollywood. Films having benefited of his experience include Monsters Crash The Pajama Party, The Girl With The Hungry Eyes, The Agony Of Love, Barn Of The Dead, a.o. In addition, he also acted as a sound editor for many movies and even composed the soundtrack on some (Blood Shack, Lila, The Wizard Of Mars).

Joining forces together, Ackerman and Coe recorded Music For Robots in 1961. One side offers the electronic sound effects by Coe, on the other Ackerman narrates the stories getting into the spoken word genre, for the joy of fans of stuff like Andromeda Strain’s soundtrack or Raymond Scott, Tom Dissevelt works.