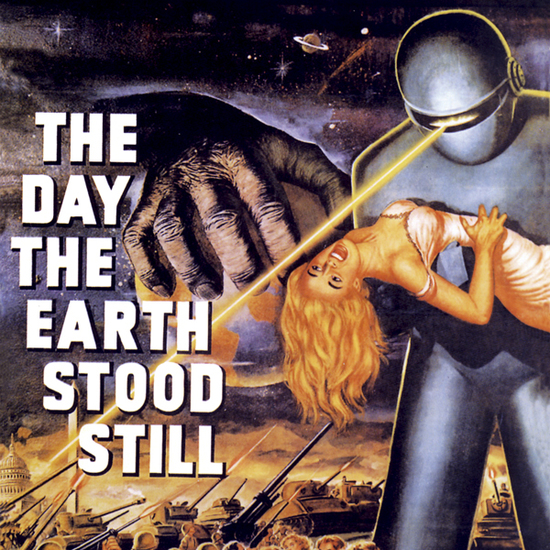 Robert Wise’s 1951 The Day The Earth Stood Still is one of the greatest titles of science fiction cinema. The 1950s was the golden age of sci-fi movies, and probably this one is on top of the list, along with Forbidden Planet. One of the coolest points of the movie is the incredibly astonishing soundtrack from outer space provided by master Bernard Herrmann (famous, of course, for his Alfred Hitchcock soundtracks). Composed in July 1951 and recorded in August, Herrmann took advantage of theremin master Samuel Hoffman to add the menacing atmosphere that would become a trademark in 1950s sci-fi soundtracks. In addition to Hoffman’s theremin other instruments included violin, cello, and bass (all three electric), another theremin played by Paul Shure, two Hammond organs, a large studio electric organ, three vibraphones, two glockenspiels, two pianos, two harps, three trumpets, three trombones, and four tubas. Unusual overdubbing and tape-reversal techniques were used, as well.

The soundtrack was surprisingly never issued on disc at its time, so here’s a unique chance to have this landmark recording on wax in your collection!