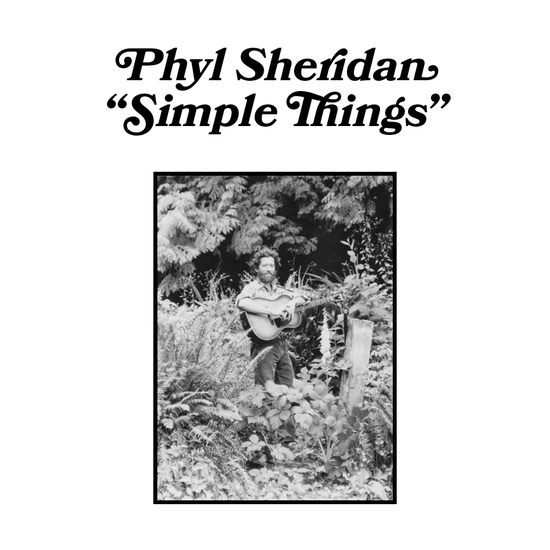 Originally released in 1975, Simple Things is a collection of Phyl’s songs from the first 32 years of his life. Having travelled the country extensively as a troubadour through his formative years, Simple Things is a culmination of his experiences and songwriting. The album is seemingly dived up into two halves, a folk side and a blues side.

Side A consists of three original folk ballads (Simple Things, People Seem To Forget, Vagabond’s Blue Trail) and two traditional Appalachian songs (Shady Grove, Jack Of Diamonds). Simple Things is the opening, title track; a man, an acoustic guitar, and the poetry of his voice. Phyl does his own interpretation of the classic tune Shady Grove, creating a foot stomping backbone unique to this version. People Seem To Forget how beautiful this song is, as timeless today as it was when Mr. Sheridan wrote it. The first sighting of Phyl’s harmonica holder comes on the fourth song, Vagabond’s Blue Trail. The first side rounds out with Phyl’s version of Jack Of Diamonds, where the wild geese and pretty women can hear his sad cry.

The B on Side B, stands for blues. All four songs on this side were written by Phyl. Bad Money starts the second side and it is quickly apparent that there is rhythm accompanying these blues. No, that’s not a didgeridoo being played on Black Gypsy, it’s a tricked out bass harmonica being joined by quinto and tumba drums. If there is a single for this record, Naturally Stoned is that jam. The only other song to feature guest musicians (Black Gypsy being the first), the saxophone work on Naturally Stoned elevates this song to a higher place. What do you do when you break a guitar string during a performance at the Monroe State Prison? Take It Like It Comes, sing the guitar parts while you change out the string, and don’t miss a beat.