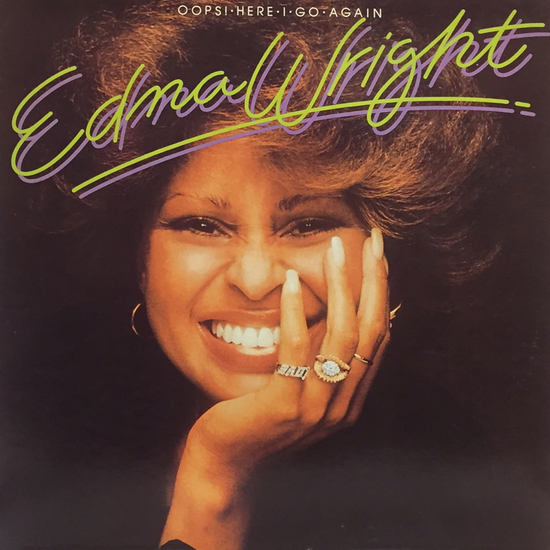 Edna Wright’s idiosyncratic “Oops!” is one of the most sublime vocal refrains in soul music history. Anchoring its host album’s leadoff cut, it sets the tone for a uniquely satisfying modern soul LP. Indeed, whilst many of its ilk come laden with filler, Wright’s one solo record is an exercise in elegant restraint; a concise killer.

Originally released in 1977 on RCA, this rare and sought­after album followed the 1973 disbanding of Edna’s much­loved Honey Cone. Produced by her husband, legendary producer/songwriter Greg Perry, the album was somewhat of a risk; a deep soul album released during the period when disco was altering the landscape of popular music. And perhaps inevitably, despite the stellar production and spine­tingling vocals throughout, the album glided gracefully under the radar, spawning only one single and seeing no chart action. That single the magnificent title­track ­ soon became a notorious rare groove stepper in its own right. However, in the years since, it has become a crate diggers classic. Its fame was elevated among hip­hop heads when Prince Paul memorably looped the shimmering intro when crafting the melodic hook for De La Soul’s late­summer­stunner “Pass The Plugs”, a wistfully melancholic back-porch nostalgia trip. And, more recently, Leon Vynehall liberally lifted the same intro for his sepia-
tinged “Midnight On Rainbow Road” to augment the excellent Rush Hour compilation Musik For Autobahns 2.

Yet this album is so much more than its most famous song. An assuredly lean masterpiece from start­to­finish, the album features a further six dynamite tracks of warm, smooth soul. As such, it’s an impossible task to choose certain tracks to highlight alongside the mighty title track. Throughout, Edna’s strikingly mature vocals are wonderful, proudly stepping out with a sophisticated groove reminiscent of Jean Carn or Gloria Scott, whilst Greg Perry’s gorgeous string-drenched backdrops add a rich depth. So much so, many of the other tracks have been sampled by producers with impeccable taste, from 9th Wonder to The Alchemist for songs featuring Nas and Talib Kweli.

Following her glowing role in the acclaimed documentary 20 Feet From Stardom, we pray this long overdue reissue will allow further light to shine on Edna. Officially licensed and beautifully remastered for vinyl by celebrated engineer Simon Francis, it has been pressed on audiophile 180g vinyl for the first time and features the original iconic artwork. Each copy includes a printed inner sleeve with a sumptuous black & white photo, full lyrics and heartfelt notes from Edna herself.