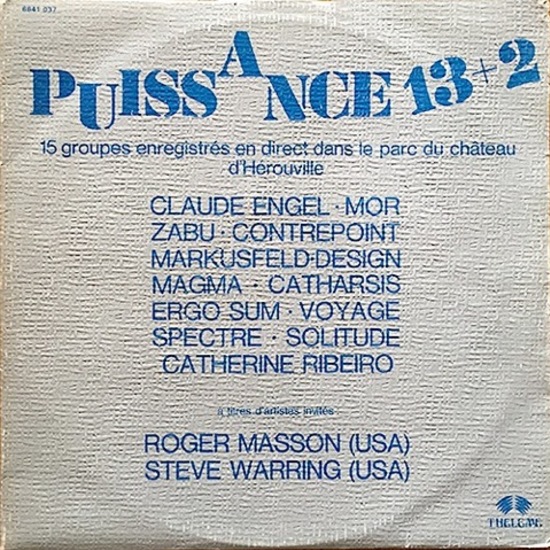 “The atmosphere was wonderful throughout all of the recording sessions, sessions recorded in the open air, in the sunshine, amongst friends. We were motivated simply by the desire to play music, the music we love the way we wanted to play it. All the titles on this album are unreleased, and most of them were recorded specifically for this occasion…. this isn’t any old debut, it’s the Debut.” — Laurent Thibault (1971)

Amazing sessions by the cream of underground French prog and psych bands, first released in 1971 on Thélème, a boutique label owned by Magma bassist and Barclay Records manager Laurent Thibault. When Thibault founded Thélème, he wanted to set up a prestige outfit. He had this in mind when he set out to fulfill his ambition of presenting a panorama of the French rock scene by gathering the best groups in France together on one double-album, to be recorded at the legendary Chateau d’Hérouville studio, live in the courtyard with no overdubs. Thibault had hoped that labels would allow their best acts to appear. Philips offered Magma (the version of ‘Mekanik Kommando’ appearing on Puissance is the first ever conceived or recorded by the band) and Catherine Ribeiro; Barclay allowed Alain Markusfeld to participate; Le Chant du Monde let Voyage appear. The band Catharsis said yes; so did Contrepoint, discovered by Magma’s René Garber. Thélème artists included Ergo Sum, MOR, Zabu, and Solitude. Two guests from America were recommended by Le Chant du Monde: folk-singers Roger Mason and Steve Waring. And happily Spectre, a band featuring legendary Hérouville engineer Dominique Blanc-Francart, brought the monster prog jazz funk synth madness of ‘Arkham’. Brilliant!