Dedicated To The Bird We Love 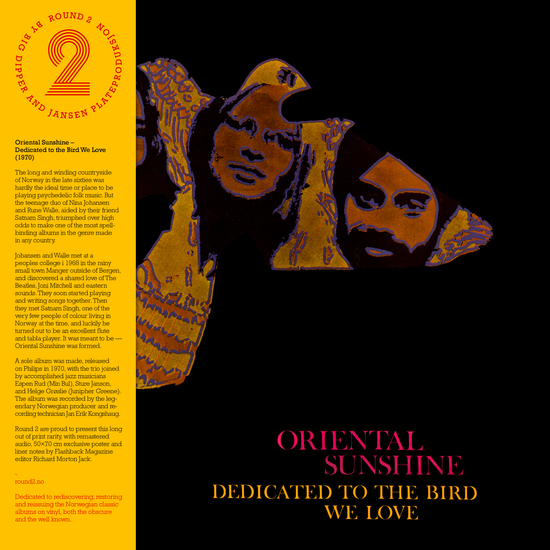 Dedicated To The Bird We Love

The long and winding countryside of Norway in the late sixties was hardly the ideal time or place to be playing psychedelic folk music. But the teenage duo of Nina Johansen and Rune Walle, aided by their friend Satnam Singh, triumphed over high odds to make one of the most spellbinding albums in the genre made in any country.

Johansen and Walle met at a Peoples College in 1968 in the rainy small town Manger outside of Bergen, and discovered a shared love of The Beatles, Joni Mitchell and eastern sounds. They soon started playing and writing songs together. Then they met Satnam Singh, one of the very few people of colour living in Norway at the time, and luckily he turned out to be an excellent flute and tabla player. It was meant to be — Oriental Sunshine was formed.

A sole album was made, released on Philips in 1970, with the trio joined by accomplished jazz musicians Espen Rud (Min Bul), Sture Janson, and Helge Grøslie (Junipher Greene). The album was recorded by the legendary Norwegian producer and recording technician Jan Erik Kongshaug.