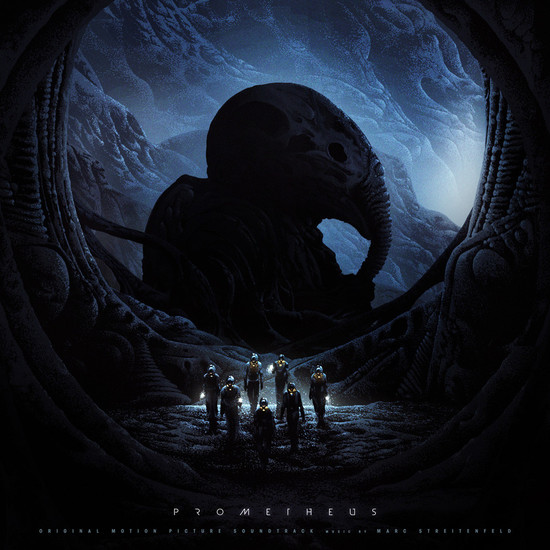 Mondo is pleased to present the premiere vinyl soundtrack release to Ridley Scott’s 2012 film Prometheus. Picking up the reigns of the franchise he created, Prometheus tells a genesis tale, setting the stage for events to come in the Alien franchise – exploring the origins of the Space Jockey, and the Xenomorph – while simultaneously telling a fractured tale of the perils of meeting ones creator.

Composed by Scott’s longtime collaborator Marc Streitenfeld, the music of Prometheus is as haunting as it is meditative and triumphant: a fresh approach to scoring a familiar universe – keeping with the trend of bringing a new sound to each successive Alien film, this one sounding like it was written to be heard blasting from the speakers of an IMAX theater. Streitenfeld takes advantage of the locales, writing music for lush landscapes and barren caves, occasionally writing compositions backwards, reversing them in post to produce a sense of uneasiness inherent with exploring the unfamiliar. Prometheus is a unique listening experience that fits perfectly side-by-side with the sagas other films.