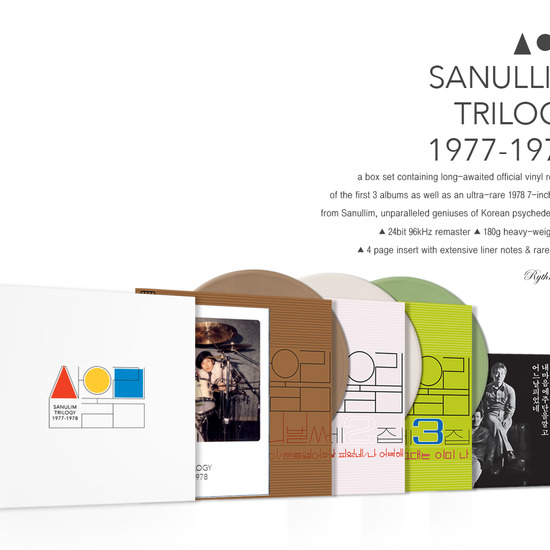 In the late 1970s, Sanullim seemingly arrived out of nowhere to take Korea by storm. By the 1990s, Sanullim’s earlier records had attained textbook – even bible-like – status for the Korean rock musicians who came later. Depending on the speaker, Sanullim were hailed as everything from heavy metal originators, punk founders, and even alternative rock pioneers. The fact is that Sanullim’s music is much broader than any such simple descriptions. The first three albums were released within a 2-year period. Because they were recorded within such short intervals of each other, the 3 albums’ tracks are deeply interconnected.

The debut album kicked off with a resounding bang which became an instant nationwide hit. Suddenly in 1977, What, Already? was everywhere. The phrase What, Already? itself took on a life of its own as a catchphrase. Comedians inserted the phrase in their skits, and kids would imitate them. The sound of the tune’s guitar riff, with its fuzz effect, grainy like crumbled biscuits, was unmistakably rock ‘n roll – a delight to listeners who had waited so long since Beautiful Woman by Shin Joong-hyun and the Yupjuns. It was Likely Late Summer, Fireworks, and Please Open the Door also got radio airplay. The uncanny and sexy tempo shift in It was Likely Late Summer, the toned-down groove of Remorse, and the sombre lyricism of That Face, That Look set Sanullim’s songs apart from those of their contemporaries. Also, the sheer rocking loudness of Fireworks and the quirky playfulness of Please Open the Door were enough to pique the interest of even the diehard rock & pop listeners. While musically, Sanullim’s sound was unmistakably rock ’n roll, the matter-of-fact realism of their lyrics and awkward vocals came together to brew up an original edge that made them instantly recognizable even to the general population. A legend had just been born.

Sanullim’s second album came in 1978, a year after their debut. As with What, Already? from the first album, the second album opens with another shocker, Laying Silks and Satin on my Heart – the track that would go on to let Sanullim function as a long-run unit. Unlike What, Already? that dives straight into the first verse after a brief intro riff, Laying Silks and Satin on my Heart opens with an extended free-form psychedelic intro, with a fuzz guitar drifting over a droning bass groove. That Sanullim were able to get away with such an experimental (and long – running 6+ minutes) opening track, and that it also ended up becoming a massive hit, attests to just how huge – and unexpected – a success the first album was. Aside from Laying Silks and Satin on my Heart, other notable experimental numbers on the second album include A Flower Blooming in the Haze, Blossomed Someday, and This Joy. The second album has no weak spots. There’s the Sanullim version of What Am I Going to Do? as well as My Beloved Departs, which embodies a distinctly Korean feel reminiscent of a traditional funeral procession.

The third album has generally been hailed as Sanullim’s greatest work ever. First of all, there’s the experimentalism of the magnum opus, You Are Already Me, that takes up the entirety of the record’s b-side, as well as Kim Chang-hoon’s My Soul (is a Barren Wasteland) that was only recognized belatedly. Also, the third album did not have an obvious ‘hit single’ comparable to What, Already? from the debut or Laying Silks… from the second album. The third album reveals some sonic departures from the previous two albums. First of all, there’s the absence of organ or piano parts (aside from a smattering of effects inserted into You Are Already Me). There are no session musicians on this record – it was recorded entirely with the bare-bones trio lineup. A nice facet of the Sanullim sound is that the guitar tone shifts from clean to fuzz along with the tune’s tempo changes. This is on prominent display in songs like My Soul (is a Barren Wasteland), and Without a Word. The clean tone is used throughout Becoming a Bird, and presages the sound of Sanullim’s later ‘children’s music’ phase. Of all the tunes on the third album, Becoming… got the heaviest airplay. The track Lonesome Night is a departure in that it’s a full-on blues number. Running upwards of 8 minutes, the track focuses on instrumentation rather than vocals. It’s a peculiar track that doesn’t have many parallels, even in Sanullim’s later work. You Are Already Me motivated many a record collector to purchase the third album. Its running time of 18+ minutes, taking up the entire b-side of the LP (all records were LPs back then), was simply unheard of until then. By the time the third album came out, Sanullim had reached peak popularity; rather than milking this further, they’d chosen to tighten their focus as a band in favor of experimentalism.

However, the albums that came later had little to show for in terms of ‘tightness’. While the fourth, fifth, and sixth albums are all decent works, the fourth was more of a compilation of the songs Sanullim had contributed to films and TV series, while the fifth and sixth were recorded while all members save Kim Chang-hwan were in their military services. Of course, all 13 of Sanullim’s regular albums are satisfying in terms of their individuality. And of these, the first three albums are absolute masterworks, indispensable for an understanding of Sanullim’s music and the historical context that gave rise to it.