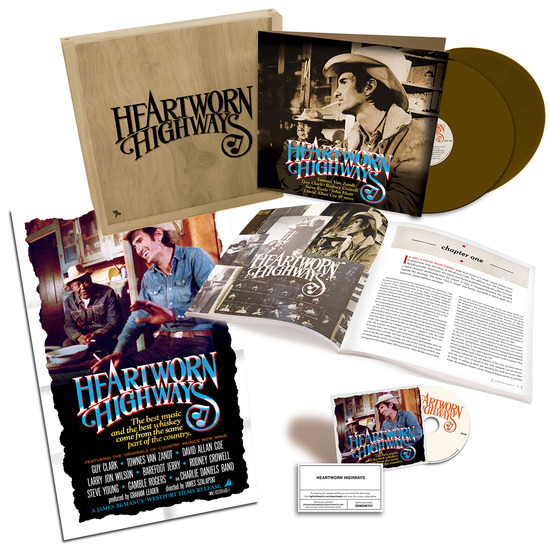 Sometimes, a documentary maker is present at precisely the right moment to capture lightning in a bottle. It happened with Dylan’s Don’t Look Back, it happened with The Decline of Western Civilization, and it happened in 1976 with Heartworn Highways.

In the early ‘70s, as Willie Nelson let his hair grow long and brought together hippies and country music fans, a new country music world was developing. Helmed by filmmaker James Szalapski, Heartworn Highways is an iconic performance documentary that masterfully captures this magical slice of time through encounters with many of the true progenitors of the outlaw country scene. These radical country artists reclaimed the genre via an appreciation for its heritage in folk and bluegrass and a rejection of the mainstream Nashville machine. Some of country music’s great songwriters, including Townes Van Zandt, Guy Clark, Steve Young, David Allan Coe, Larry Jon Wilson, and Steve Earle appear on both screen and soundtrack, where musical highlights include Clark’s brilliant “Desperados Waiting For A Train,” Young’s stirring “Alabama Highways” and Van Zandt’s emotional “Waiting ‘Round To Die.”

The hard living – and hard partying – lifestyles of Heartworn’s stars are played out on screen as we visit Van Zandt’s Austin trailer, see Coe play in Tennessee State Prison, and witness a liquor-fueled Christmas at Clark’s house. No wonder the film’s original tagline read: “The best music and the best whiskey come from the same part of the country.”

Outside of a limited film festival circuit, the film remained largely unseen, yet Heartworn Highways remains a pinnacle document in country music history. Its weighty legacy still rings true through fans like Radiohead, Lyle Lovett, Father John Misty, and Spiritualized, and through Hollywood’s own interpretation with shows like Nashville and the Oscar-winning film, Crazy Heart. To document the new generation of country artists who carry on the film’s tradition, a sequel-Heartworn Revisited–will be released alongside the original in March 2016.

Celebrating the 40th anniversary of one of Americana’s true masterpieces, we are proud to present the original documentary film with its stunning soundtrack (first released by Hacktone Records in 2006) in a long overdue definitive edition package.