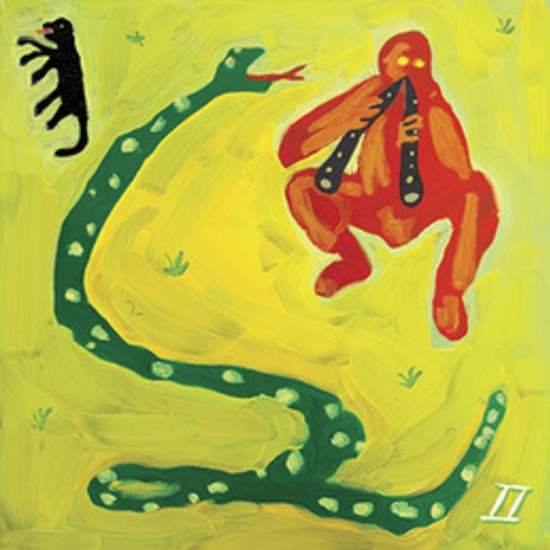 The plan, it turns. Some many revolutions the horizon. Major mutations blooming and balloon-in a year, in a life. Wand launch their third album in what can only be called the relative blink of an eye, and it is 1000 Days. This year’s last year: August of 2014 was Ganglion Reef, Wand’s debut album release, on GOD?, reveling in their dark circuits and three-ring modulations. Following that, they ranged from their south-Cali base, towing their sound around this maze of interstates and state routes. Shows of all kinds were playing, plenty of people to meet up with on the way. Hands across the water: Europe got booked. And suddenly, just look over your shoulder — it was March of 2015, with a second album entitled Golem (this time on In the Red) trailing Wand’s sound farther down the road, past the sky, into storm and ca-
sino food. No time to spare; more dates to be played across the landmass. And another set of European dates later, 1000 Days. One year in the life of Wandso far: the world — some beyond.

But try as they might, they are earthbound; no leaving this planet and its diseases behind. The simplest thing that a Wand in its clear-eyed lucidity might hope for is to be put up, up and away for a nice rest, someplace nice. But the state is a face with a wide open throat, and power’s got an unprecedented number of arrangements and places for other lost faces like Wand. Everything can be counted. Yes, some quiet would do them right — but Wand don’t deal in quiet, they manufacture a little life within an elaborate craftwork of sound, among the endless social contrivances of popular music and its market convulsions. 1000 Days later, maybe we can get together somewhere there — if we aren’t overcome by inertia, by need and fear.

Recorded in Los Angeles and San Francisco in between tour days, 1000 Days finds Wand searching in corners. Where have all the people gone? Where have they put them? Panoramas of the body history are viewed through Wand’s spy-glass as it sweeps the horizon. Major mutations blooming and ballooning in the cities. The vault where plans for an invasion gather dust. The latest fables buzzing down the civil wire. All these and more are folded and packed neatly into a traveler’s trunk stuffed with tonal frequencies — sounds that tickle a Pavlovian response, the heartache and the sadness and the anger that we feel, the tug of our highest ideals. All by punching a key or playing a chord — an illusion made of parts representing a sequence or set of steps that, taken together, add up to an exploded diagram of a subject and its perception, meant to be swallowed as a whole. Whether it addresses a way of life, a home-brewed philosophy, a dark part of history or a cacophony of personal desires, the song remains truly a thing, regardless of the angle of affection.

Never shy of a new machine, Wand found extra texture during 1000 Days via synthetic animation. Songs compelled them to reach across lifestyle, relying on broadcast to find out who might need the sound. The atmosphere is quicksilver and the space acoustic; as a beacon sparks electric, a cascade of hi-fi noises for everyone’s ear moles — raucous, impassive, inevitable musical expressions.

From their seat at this late phase of western life, Wand flash back to the beginning that is always beginning: in green sun, on blue earth, switching restlessly through phases of music in a single passage of a song. This is the way their sentences are made, it’s where Wand is coming from — they’re inquiring about what was heard in order to parse what wasn’t yet. Everything’s always changing, and our perception is not yours, or theirs. You may not even think of Wand as a band of people playing music — perhaps it is only a demand from a sound, until the caravan Wand arrives and assembles some bodies before you, when we bodies produce music that goes directly below and inside. Everything thereafter was collusion and delimitation and crocodile tears. The hope is to use your head, to escape the chains wrapped invisible around us, to sort out the one from the other. Play the infinite game.