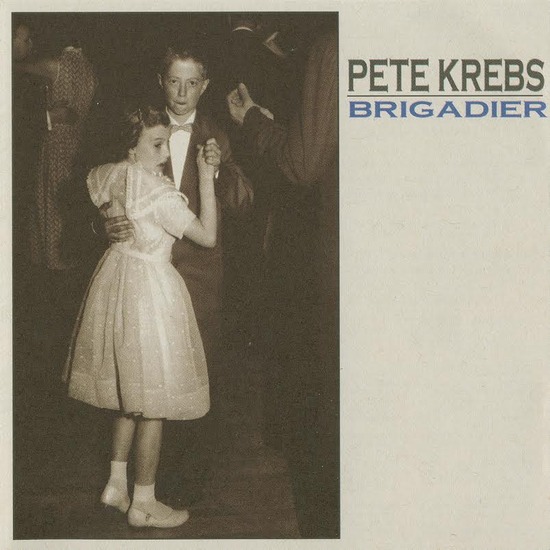 In the mid 1990’s, after releasing material by renowned rock acts such as Hazel, Heatmiser and many other bands, from Portland, Oregon, Cavity Search Records facilitated a string of solo records by the frontmen of these acts – starting with Roman Candle the 1994 solo debut of Heatmiser’s Elliott Smith. The following year on July 4th 1995, Cavity Search Records released Thrillhammer & Hazel frontman Pete Krebs’ first solo record Brigadier [CSR19] to exceptional critical and popular praise. The stark and stripped down instrumentation, arrangements and genius songwriting, informed by the dark and damp city, caught the ear of the underground – and aurally marked a specific time and place; 20 years ago – 1995 Portland Oregon.

A lot has changed in the world and in Portland since this seminal release. It is a more complex world – where ideas and information are spread without effort. Today Portland is as much (or more) an idea in people’s minds as a city where people actually live. Metropolitan with a shiny veneer. Television jokes and sketch comedies. Technology and sports and outdoor fanatics – all with microbrew smiles on their bearded faces riding bicycles through the magic streets. However, the truth of the matter is that there is a lot that hasn’t changed. Vinyl records are the fastest growing format for fans to listen to music.

Cavity Search Records has continued to release records (81 and counting since 1992) by an eclectic array of talented artists. Krebs has continued down his unique musical path – continuing his solo work and recording, releasing and performing with his bands Pete Krebs Trio, Prairie Dogs, Golden Delicious, Pete Krebs and The Kung Pao Chickens, Stolen Sweets, Pete Krebs and His Portland Playboys, and The Earnest Lovers, to name a few. His work continues to meet with popular and critical acclaim – and he has secured a place in official state history being inducted into the Oregon Music Hall of Fame in 2013 along with his Hazel bandmates.

Another thing that has not changed and this is obvious and apparent to those of us who really live in Portland, is the dark place that is heard so clearly in Brigadier. It is not hidden by the pretend world that exists only in the minds of those who are observers of this small city. The minor chords and Krebs’ soft and intimate singing on the LP echo the dark skies and wet bricks of the 8 month long rainy season. The club that provides a damp warmth on cold and rainy nights. The melancholic tone peppered with shards of hope perfectly reflect the few and fleeting sun breaks. By Krebs’ own description the record is a “document.” This document’s 12 pop masterpieces perfectly communicate the palpable feeling of the true Portland. Twenty years after it was recorded in a basement – 2015 – Brigadier sounds like it could have been recorded in that basement yesterday. And really – that truly means it is Timeless – communicating as a document of a time and place and translating perfectly into the soundtrack for here and now.