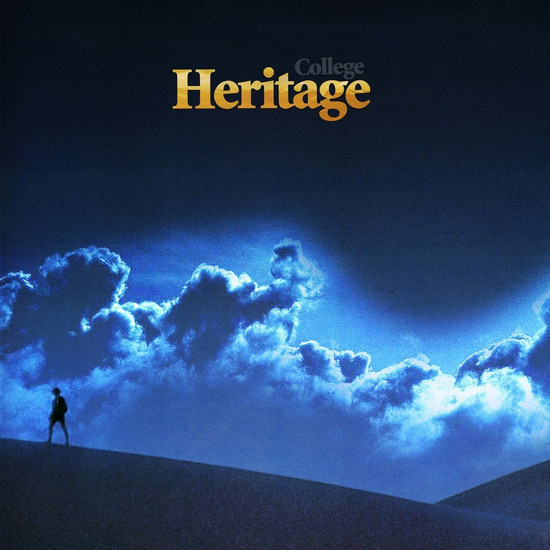 Heritage is the new album from acclaimed French electronica artist College, released August 26th on Invada Records, who recently released College’s debut album Secret Diary on physical formats for the first time. Heritage will be available on Digipack CD, LP (blue vinyl), and there will be a limited (200 copies) edition box set available from www.invada.co.uk

“When I was a child I drew a lot, feeding my imagination with cartoons and collections of illustrations borrowed from the library. Several months ago, while I was unpacking some boxes during a move, I came across one of my sketches from that time and, with it, a multitude of memories resurfaced. I realised then the fascination that works like ‘Starwatcher’ had exerted over me and how formative French Science Fiction had been in the way I compose music. With this album, I wanted to pay tribute those wonderful artists that include, among others, René Laloux, Jean Chalopin, Bernard Deyriès, Shuki Levy and obviously Moebius, whose recent death I learned of when I had finished writing ‘Heritage’. Having such profound admiration for the work of Jean Giraud makes the melancholic accents of the record resonate with me today in a very special way” College, May 2013

College is David Grellier, born in 1979 in Nantes. In the late ‘90s, he acquired his first computer with which he produced several demos influenced by artists such as Jeff Mills and Aphex Twin; and labels such as Soma Records, Peacefrog and Warp.

In April 2007 he started Valerie, a blog that has become both a record label and an expanding cultural network of international artists. That same year saw him release his first self-produced album, Teenage Color EP, which put him into contact with the German illustrators, The Zonders. They have continued to work together since, with The Zonders providing their signature graphic style for the album covers of Secret Diary (2008), Northern Council (2011) and A Real Hero EP (2009).

In 2011, Nicolas Winding Refn chose ‘A Real Hero’ by College feat. Electric Youth as the theme song for his acclaimed film ‘Drive’, which then went on to win the award for Best Director at the Cannes Film Festival.