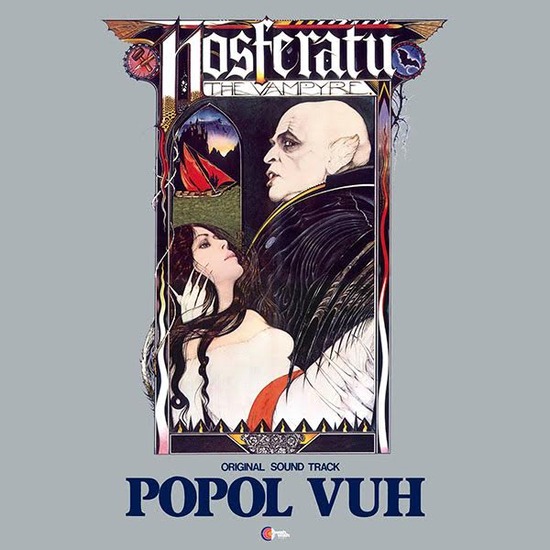 The story of the Nosferatu soundtrack editions through the years appears a little chaotic. Several editions, with several sleeves and completely different tracklists have appeared in different countries. What we tried to offer here is the definitive edition of Popol Vuh’s works for this fantastic Werner Herzog 1979 tribute to the old Murnau classic. When asked for a new soundtrack for Herzog’s project, Florian Fricke and Daniel Fichelscher came out with a magnificent album that once again, as it had happened with Hosianna Mantra, opened new paths to follow. The album, although having been recorded with the movie in mind, was not titled Nosferatu. Instead it was released as Brüder des Schattens – Söhne des Lichts, which can be translated as “Brother Of Darkness – Son Of Light”. It first came out in 1978 featuring amazing new age / ambient escapades based on repetitive passages and instrumentation of incredible beauty, recorded with the help of Al Gromer (Amon Düül) on sitar, Bob Eliscu (Between) on oboe, Ted de Jong on tamboura plus a complete church choir ensemble from Munich. Brüder des Schattens…, also issued in other editions as Nosferatu, makes disc one on this gorgeous double LP set.

Disc two of the Wah Wah edition features the LP that was originally released as the Nosferatu Original Sound Track album, also known as On The Way To A Little Way. A 1978 release, although it contained material recorded prior to that date. Right in the middle of the film production, Herzog felt he needed more music and asked Fricke for obscure, scary material. He searched the Popol Vuh archives and compiled the great collection that Nosferatu / On The Way… is. It came out a varied selectionç where older Moog tracks mix with more reflexive material that already gives clues of what’s to come in Brüder des Schattens… Nevertheless, despite all the variety Nosferatu / On The Way To… turned out to be a fantastic, classic Popol Vuh album. We have added one bonus track previously unreleased in vinyl format.

Werner Herzog: “The music in my films is also very much neglected, if I may interrupt you, in Germany as well. Since AGUIRRE, my friend Florian Fricke, has done the music for almost all my films – for STEINER, for LA SOUFRIERE, for STROSZEK, and for HEART OF GLASS – and I’ve tried to push very hard so that he would be given the National Film Award this year. They’ve never given it to him, and there has been complete neglect of his work. Not even a single mention! And this year they just by-passed him once again!” [From: Images at the Horizon, 1979] Popol Vuh has been nominated three times for an Oscar for best original score: 1972 (Aguirre), 1979 (Nosferatu) and 1987 (Cobra Verde).

Collected in a gorgeous limited edition double LP set, first half of the edition issued in transparent red vinyl, are the two albums that relate to Werner Herzog’s Nosferatu. Housed in a fantastic silver sleeve with the Klaus Kinski / Isabelle Adjani artwork from the movie poster as used for the 1979 PDU Italian issue. The gatefold cover artwork is completed with graphic material from On The Way To A Little Way plus photos from the movie kindly provided by Werner Herzog himself. A killer 50 × 70 cm full colour reproduction of the movie poster is included, as is an insert with detailed liner notes and one bonus track not on the original albums.