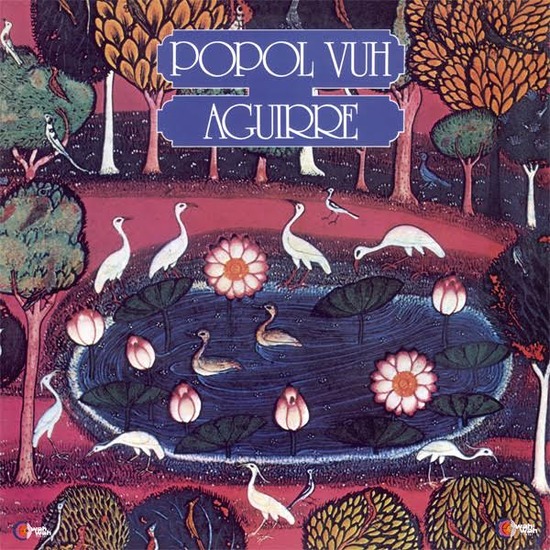 Werner Herzog’s 1972 film Aguirre, The Wrath Of God was the first collaboration between the famed director and Popol Vuh. Florian Fricke was approached by old friend Herzog to do the soundtrack for his third movie. Three years later, in 1975, after the international success of Herzog’s film, Popol Vuh issued the LP Aguirre. It featured material recorded for the movie plus some other songs. Some of them recorded prior to 1975 – the Aguirre soundtrack ones, of course, plus there is the presence of the big Moog from Popol Vuh’s early albums, and also contains Morgengruss II, an update of the Morgengruss song that had prevously appeared on Ensjäger Und Siebenjäger.

“Popol Vuh’s “hypnotic music” for Aguirre met with considerable acclaim. Roger Ebert wrote, “The music sets the tone. It is haunting, ecclesiastical, human and yet something else… The music is crucial to Aguirre, the Wrath of God…” AllMusic noted, “The film’s central motif blends pulsing Moog and spectral voices conjured from Florian Fricke’s Mellotron-related “choir organ” to achieve something sublime, in the truest sense of the word: it’s hard not to find the music’s awe-inspiring, overwhelming beauty simultaneously unsettling. The power of the legendary opening sequence of Herzog’s film…owes as much to Popol Vuh’s music as it does to the director’s mise-en-scène.”

Herzog explained how the choir-like sound was created, “We used a strange instrument, which we called a ‘choir-organ.’ It has inside it three dozen different tapes running parallel to each other in loops. … All these tapes are running at the same time, and there is a keyboard on which you can play them like an organ so that [it will] sound just like a human choir but yet, at the same time, very artificial and really quite eerie.”

Werner Herzog: “The music in my films is also very much neglected, if I may interrupt you, in Germany as well. Since AGUIRRE, my friend Florian Fricke, has done the music for almost all my films – for STEINER, for LA SOUFRIERE, for STROSZEK, and for HEART OF GLASS – and I’ve tried to push very hard so that he would be given the National Film Award this year. They’ve never given it to him, and there has been complete neglect of his work. Not even a single mention! And this year they just by-passed him once again!” [From: Images at the Horizon, 1979] Popol Vuh has been nominated three times for an Oscar for best original score:? 1972 (Aguirre), 1979 (Nosferatu) and 1987 (Cobra Verde).

There have been several different editions of Aguirre and each has varied slightly or quite a lot from the original issue. Several reissues change the last track (the 17 minute long Vergegenwärtigung) to include material from other Popol Vuh albums, even in cases the song is listed on the sleeve the music is from completely different sources. Thanks to the accurate archive work of SPV on offer here is the original version of the album as it was first released in 1975. Limited edition featuring one bonus track, remastered sound and original artwork plus an insert with liner notes and photos. 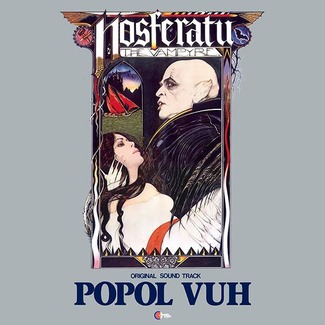