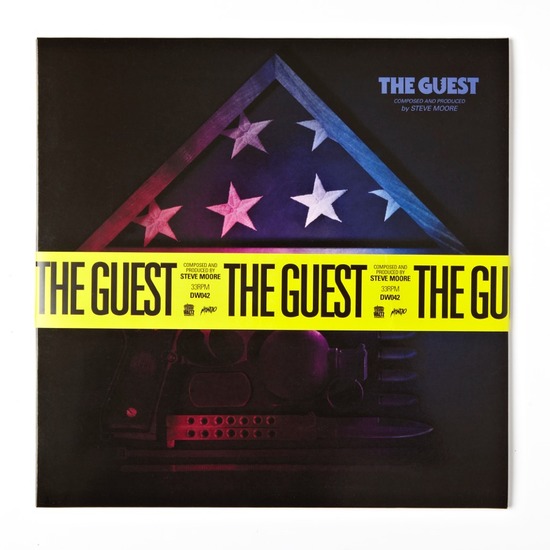 Death Waltz Recording Company has yet another ace up our sleeve with the soundtrack to one of 2014’s best action films, Adam Wingard’s The Guest, with a musical score by Steve Moore. Critically acclaimed, the “guest” in question is David, a young man who lands on the doorstep of the Peterson family claiming to be a comrade of their son, who was killed while on tour in Afghanistan,. But while David appears to a model citizen, the family daughter discovers several clues that make her wonder “Just who is this man?”

Just like the film is a throwback to 80s thrillers like The Terminator, Steve Moore’s score belongs in another time, another place. Homaging rather than emulating, the music feels not only absolutely authentic but also fits the film like a glove. Great synth melodies are plentiful, the electronics swell with mystery and intrigue, and the sense of the robotic electro music has is perfect for the character of David. It’s an intense journey but not one without reward – don’t be afraid to let The Guest into your home and onto your turntable.

Death Waltz is excited to offer this gorgeous vinyl package with artwork by Alan Hynes, offering the first collectible to fans of The Guest – a film that has already solidified a spot as a cult classic that lovingly subverts the action genre with the precision and confidence of its titular character.

“The score, by Steve Moore (of the band Zombi), also drives the movie along with style. It’s pure, catchy synthesizer heaven. A throwback to the 70s and 80s but with the feeling of Drive and Grand Theft Auto from the equipment used by John Carpenter. It tells the audience while what we are seeing might seem dramatic, it’s supposed to be fun.”
- Slashfilm

“Moore’s music is probably going to be one of my favorite scores of the year. It’s so 80s, but in the best way possible.”
- Collider