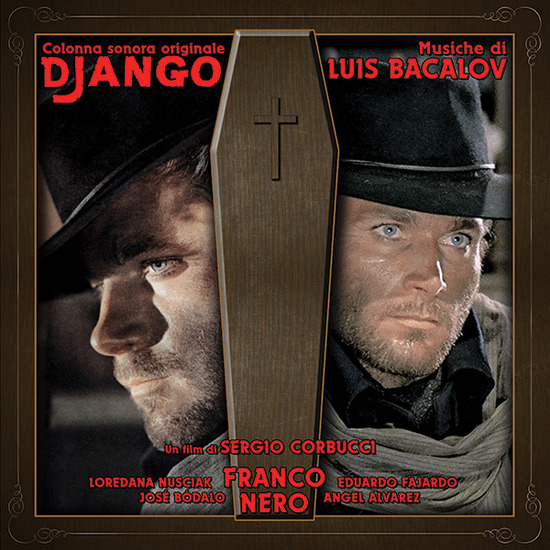 In 1966 the ‘spaghetti western’ genre was reworked once again by Sergio Corbucci’s “Django” – a director with the impressive average of 2-3 films per year. The settings change, with sand replaced by mud, and the protagonist, rather than moving on horseback, walks through wilderness dragging a coffin which hides a mysterious content. As Leone chose Eastwood, the hero is embodied by the unknown Franco Nero.These and other factors made “Django” an absolute cult, that gave way to a long series of sequels and that in recent times has been repeatedly honored at several levels (not only movies but also comics, music, cartoons…). Among the most recent contributions we have Quentin Tarantino’s “Django Unchained”: not only the original theme was used in its soundtrack, but the film has even an exceptional appearance of Franco Nero in the flesh! Perfect accompaniment to the muddy, cynical and gloomy scenarios, is Luis Bacalov’s music, an Argentine conductor well known to Italian progressive rock fans, since he worked with New Trolls, Osanna and Il Rovescio della Medaglia. The “Django” main theme gives chills even today, almost 50 years since its conception; it was recorded in two versions, one sung in Italian (by Roberto Fia) and the other in English (by Rocky Roberts), but only the first was released as a 45rpm at the time, while the second, along with several other tracks, was revived for the first time only in 1985.