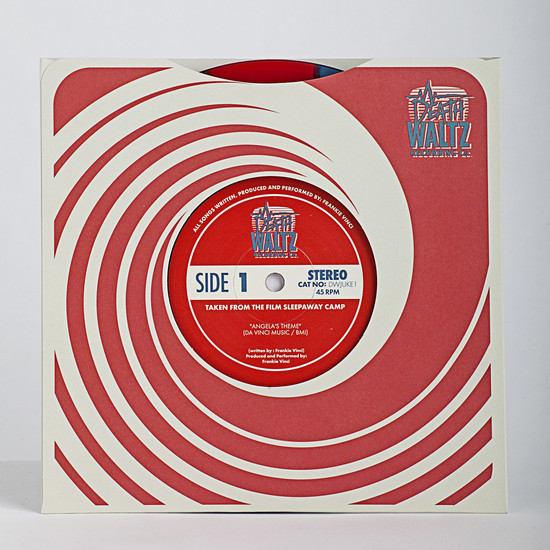 Frankie Vinci recorded three songs for the US slasher movie Sleepaway Camp and Death Waltz are extremely proud to be releasing them officially for the first time ever. Taken from the original 4 track cassette recordings and re-mastered for vinyl under supervision of Vinci. Angela’s Theme is generally regarded as one of the greatest songs featured in a horror movie during the 80’s with it’s mix of synths, drum machines and an absolutely killer chorus. The other two tracks also feature in prominent scenes in the movie and are presented here in their entirety.

“When I sang the 3 songs I was trying to channel David Bowie. Euro rock music was big in the 80’s, so I was inspired to keep the songs fresh with a Euro vibe. I’m not sure I came close to a Bowie vocal but I guess it worked in its own way. The3 songs may sound sonically inferior to today’s digital recordings but the heart of “Angela’s Theme” is the eerie notes in the intro and the overall vibe. The Yamaha keyboard’s bell sound actually adds to the creepy feel of the movie ending.” – Frankie Vinci