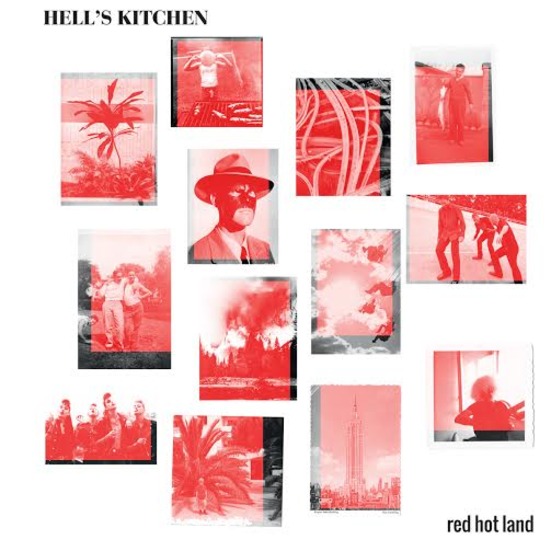 Having become one of rural tribal blues leading bands in Europe, Hell’s Kitchen are back riding a fresh breeze with Red Hot Hand. After 4 albums, hundreds of dates all across Europe, this new record arrives with big ideas, clear ideas and, most of all, hot ideas. More than a turning point it’s an advance in virgin territory. Back to the source, better, a quieter detour. Here, Hell’s Kitchen evoke their dear soul music (since I was a child), but also more mixed atmospheres, the spellbinding and minimal feeling accumulated after all those years of touring, recording sessions and other torments of life in a band. Recorded in the quiet of a lake Geneva country house, this record is the one we have always been waiting for. The one where Monney B tells us about his ancestors, his obsessions, his tropical loves, through his french, unreal english and mixed tongues from wherever. Multiple beats, industrial-tecno atmospheres where searing bottle neck overlaps cool attitudes, Tom Waits in a glass, Dan Auerbach on the shoulder…The sound is new, tense but not aggressive except if looked at under a magnifying glass. Analogically mixed at Matt Verta –Reys mythical NYHed studio, according to the logic of the blues, the album sounds new and features tormenting ballads (Drain) as well as groovy hits (I wanna be the one). “Monkey”, a sexy lament for all ages or an affair in latino places, all that is needed to go from one shore of the Atlantic to the other.These 3 guys, friends since forever (well seconded here, in addition to Matt Verta-Rey, by Mama Rosin’s and Moi J’Connais Records Robin Girod who directed half the album), take off with an absolutely new approach where fans of the 70’s, The Roots or Captain Beefheart can loose themselves…long time admirers and newcomers. Restful, or maybe finally rested. One would like, to think it will never stop, to see them, to meet them, to understand the risks taken. To know these guys who deep down embody a dreamy, rough and invigorating blues.Moi J’Connais Records is proud to present it’s release n° 028 and wishes to recall that the birth of the label is due to this Geneva band. Release n° 001 being nothing else than the, sadly no longer available single: Hell’s Kitchen vs Mama Rosin where each band covered “baby please don’t go”. It’s also thanks to them that a lot has changed in Geneva. The cutting, edged, broken line of the Geneva Bayou Connection, including Hell’s Kitchen, Mama Rosin, the Dead Brothers…A long story finally offering the record all are waiting for. The Hell’s Kitchen for years to come. Fresh and fun but very experienced, a legend in the making. From New York to Zürich, from Coimbra to London, this release binds together the Moi J’Connais catalogue. From Blues, Calypso and brazilian groove to , mind-bending new releases. Regarding Hell’s Kitchen I have nothing more to say: I adore them, I find them absolutely stupendous.