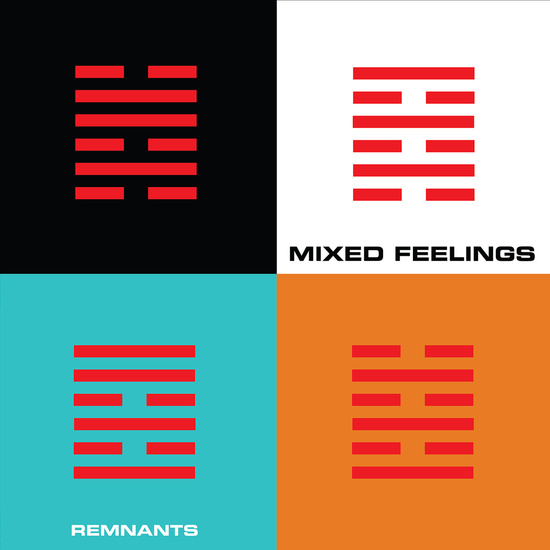 Medical Records in partnership with Crispy Nuggets Blog present the unreleased recordings of England’s Mixed Feelings. Mixed Feelings grew up
in Basildon which was also the home of Depeche Mode (in fact, they went to the same school). In 1981, Sean Cooper met Martin Gore on holiday (around the time of “New Life”), and they instantly hit it off discussing synthesizers, school, teachers, etc. Martin was inspirational for Sean to follow his dream of making music. After a few bands, Sean started a band with longtime friend Geoff with influences like old disco (Chic, etc) and a bit of Bauhaus, PIL, etc for good measure. The first incarnation was called Polyphonic Movements
but changed to Mixed Feelings after their friends Mark, Alan, and Pete joined the band. They played shows at school and various locations until 1982
when they first entered a studio and recorded “Final Demand”, “Because Of You”, and “Ice Machine”. These tracks received some local airplay, and they continued to play more gigs. A year later, they entered the studio again to record a few more tracks (one of which was “Another Place” which ended up on the 101 Record Compilation). Sadly, after a few more cheap recording sessions, the band split up in 1984. Sean later worked in the 90s as a soundman for The Prodigy until 1993 until he relocated to New Zealand, and he continues to write music. This LP is a collection of known recordings by Mixed Feelings. It is a brilliant snapshot into the minds and talent of a group of young musicians on a mission. The opening track “Another Place (Like Home)” sets the mood with melodic synth lines and punchy electronic accents. Excellent songwriting and moody atmospheres prevail on this record. 11 tracks in total (including one cover and homage to their inspiration early on…). Other notable tracks include “Because Of You”, “They Told You So”, and “The Captain”. Highly influenced by early Depeche Mode, Human League, and Soft Cell, this collection of tracks will certainly appeal to fans of the mentioned acts as well as classic new wave acts such as Gary Numan, Ultravox, and Thompson Twins.