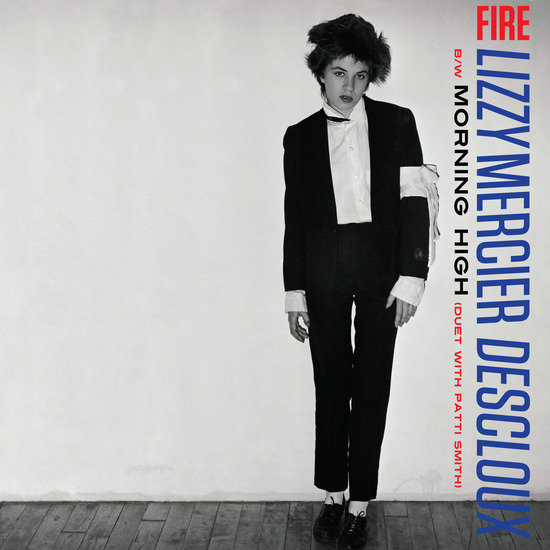 She was a spectacle: carnivore and prey in one, like a walking wildlife film, with that riveting amoral charisma of nature. A complete mystery.
- Richard Hell

She was shy, yet willful. She was quiet, yet ready to strike, like a small poisonous snake. She was her own invention- stubborn, secretive, open, impossible to pin down, and impossible not to love.
-Patti Smith

Next year, we will release a detailed series showcasing the work of impassioned poet, painter, actor, and prolific, self-taught musician Lizzy Mercier Descloux. Instrumental in the late 70s New York underground yet of Parisian origin, Mercier Descloux, with partner Michel Esteban, established the magazine Rock News and ran in the same circles as Patti Smith and Richard Hell. Lizzy became a genre defying artist and pioneer of worldbeat and avant garde rock, and supreme minimalist of the no wave genre in her own right. A glimpse of what’s in store for this upcoming archival series, this 7" presents two key tracks from the Mercier Descloux catalog: the epitomic, 1979 disco-punk classic “Fire” backed with a rare session featuring Lizzy and “Godmother of Punk” Patti Smith reciting a bilingual version of Arthur Rimbaud’s poem, “Matinée d’ivresse/Morning High,” set to music by experimental contemporary Bill Laswell.

Lizzy spent the next two decades living somewhat nomadically in Africa, France, New York, South America, and the West Indies, never ceasing her pursuit of the arts as she transitioned from music to painting and writing. Mercier Descloux was diagnosed with cancer in 2003 and passed away the following year. This year marks the ten-year anniversary of Lizzy Mercier Descloux’s death; the five albums in store for 2015 (CD/LP/Digital) will be newly remastered with bonus tracks, expanded artwork, photos, and new liner notes.