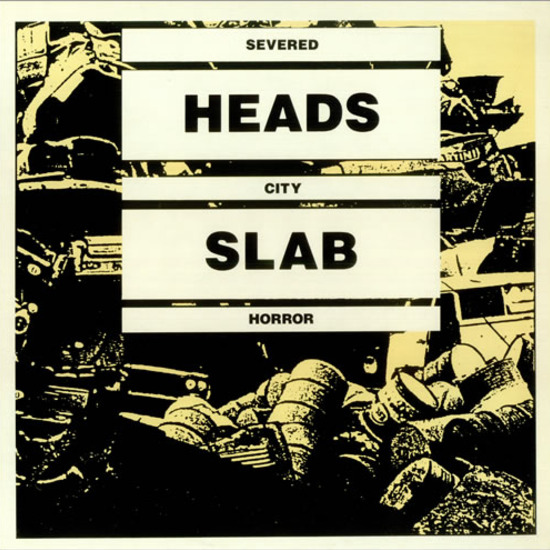 Medical Records presents two of the most striking and iconic reissues in its catalog. Second up of the two Severed Heads reissues is 1985’s “City Slab Horror”. Severed Heads are one of the most diverse and expert sound palette engineers and are also repeatedly overlooked and far underrated. Hailing from Sydney, Australia, they formed in 1979. The band was composed of many different members though it’s existence but Tom Ellard has always been the constant since 1979 when he joined the band. The group’s early recordings were characterized by manipulated tape loop experiments, cleverly modulated noise elements and repetition. This period is very well suited to the early industrial period. Over time, the sounds morphed into more melodic leanings with pop elements and more prominent synth leads and backbone. “City Slab Horror” was released in 1985 on UK “Ink” records. The LP though 2 years after “Since The Accident” continues to carry the torch illustrating the evolving transition between experimental structure and loops into the catchy pop hooks that would later define such releases as “Rotund For Success”. This LP seems to move slightly into darker territory in general with it’s synth textures and slower tempo tracks but overall has a nice “continuation” feel from “Since The Accident” yet with obvious technological evolutions.

The opening track “Spasm” drags the listener down the Sev Head mental rabbit hole instantly with it’s heady samples and eloquent drum machine rhythm. “Spitoon Thud’ is a rambunctious affair with it’s cacophony of samples and percussion. “4.W.D.” is a great sneak peak into the sound of the Sev Heads LPs to come with it’s treated vocals and pop hooks (perfected on later records such as “The Big Bigot”). Next to last is the amazing “Goodbye Tonsils” track which is unstoppably catchy and features more of the creative use of samples which made this group so interesting. Though signed to 80’s industrial label icon Nettwerk in North America and often classified in the same vein, these records are not easily definable and actually have a life of their own. Though commonly misclassified with a lot of the late 80s industrial/goth scene (as well as touring with Skinny Puppy at one point), Severed Heads would be more accurately in good company with acts such as Cabaret Voltaire, early Coil, Chris & Cosey (and CTI), and the like.

Long out of print and a rarity on the collector’s market, it is presented with original repro jacket. Remastered by Tom Ellard form the original source masters. Presented on high-quality 180gram heavyweight bone white vinyl. Features bonus LP insert compiled by Tom Ellard with ephemera from the time. Limited Edition.