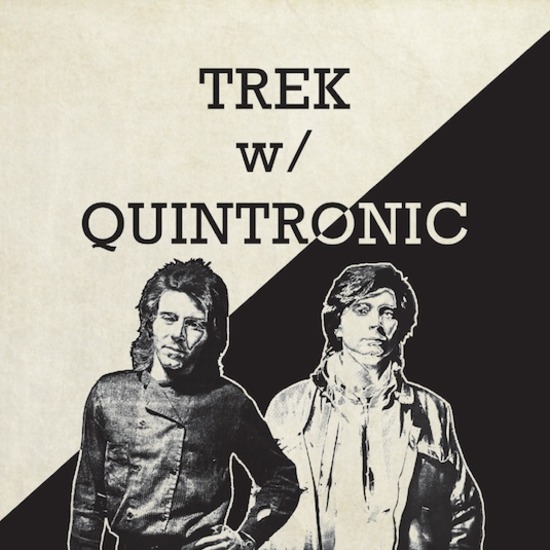 Trek with Quintronic are the duo of Paul Wilcox (Trek) and David Kane (Quintronic). Formed from the ashes of prog rock band Masque in 1979, they moved from Buffalo, NY to New Hope, PA with contacts in the Philadelphia music scene. They recorded two pioneering albums of unique electronic rock, “Landing” LP from 1980, and the self-titled follow-up “Trek w/ Quintronic” LP in 1981.
“Landing Plus” compiles the complete discography of Trek with Quintronic on a double vinyl for the first time in over 30 years. The band utilized a synthesizer-heavy set up using a Roland CompuRhythm CR-78 drum machine, ,Yamaha CS-60, Minimoog, effect pedals and guitar. All songs on the album are strictly electronic sounds, no piano or organ. Trek with Quintronic wrote songs with a powerful sound, myriads of compositional ideas, synthetic noises and catchy melodies. Paul’s rather unique vocals lie somewhere between David Bowie and Richard Butler of the Psychedelic Furs.
This deluxe edition has been remastered for vinyl by George Horn at Fantasy Studios in Berkeley. LP 1 is the “Landing” LP and LP 2 is the “Trek w/ Quintronic” LP. Each double LP set comes in a gatefold sleeve with 2 postcards featuring live photos, an instrument list and quotes. This collection highlights a lost duo with a big sound on par with Ultravox, Human League, OMD or Devo.