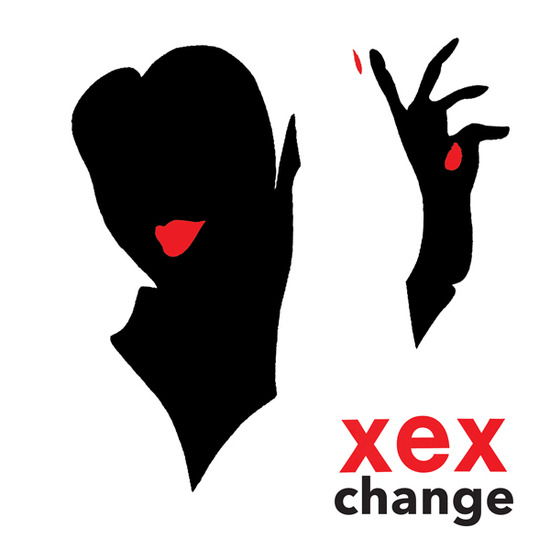 xex were an all-synthesizer band from South River, New Jersey in the late 1970s. The band formed when a trio of high school misfits with funny names (Waw Pierogi, Thumbalina Gugielmo and Alex Zander) teamed up with some friends from Rutgers College. They released their debut album “group: xex” in 1980 which Dark Entries reissued in 2010. We were lucky to discover the master tapes of their unreleased second album “xex:change” in Waw’s basement. “xex:change” takes a leap from where the band left off at the end of 1980. David Anderson left the group making xex a quartet. Recorded during the summer of 1981 and produced with Ziggy Rodberg, xex further developed the aesthetic of the first album. The seven songs here are more complex and hypnotic than the synthpunk outbursts of “group:xex.” Their new synthesizers, a Sequential Circuits Prophet 5 and a Minimoog, evoke the high-tech utopia of Patrick Cowley and proto-techno of Afrika Bambaataa. Thumbalina’s vocals have a detached, icy quality. Lyrics revolve around xex’ melange of oeuvres – pop, kitsch and New Jersey mall culture – offering commentary on species-specific adaptations for copulation, technophilia/phobia and the Jersey shore. “xex:change”, a multiple entendre that refers to the evolution of the group since its first album, group interaction in the creative process, and underlying sexual ambiguity. The group did not have the funds to release the album and it sat in obscurity for over 30 years. All songs have been remastered from the original reel to reel tapes for vinyl by George Horn at Fantasy Studios in Berkeley. The vinyl comes housed in jacket created by Alex Zander for his senior art project in college in 1980. Each LP includes a double sided 11×11 cardstock insert with lyrics and photos. Also included is a full length DVD featuring a 9-song xex concert from 1981, recorded at Hurrah in New York. With the bonus DVD included in the new LP, more people will see xex perform than ever saw them play live. More than 30 years later xex:change finally sees the light of day and fits in today’s world all too perfectly.