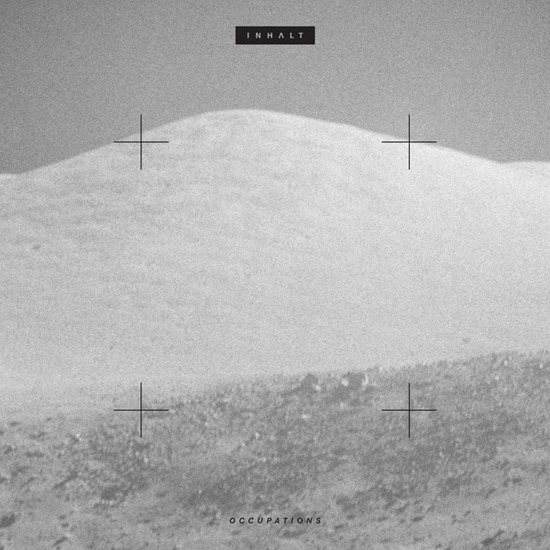 Dark Entries is proud to release the sophomore EP “Occupations” from San Francisco based synth trio INHALT. Consisting of European and East Coast natives– Matia Simovich, Bryan Gibbs, and Philip Winiger– INHALT’s core operative strategy is of sonic fidelity and integrity rather than nostalgia. Living through the rise of a surveillance society, neo-liberal agendas, and the permeation of the ephemeral into popular culture, INHALT return with a focused commentary in the form of the “Occupations” EP. The record was produced over a year and a half, and mixed in both Austria and California, employing the best of modern and vintage techniques and technology. The sound is INHALT’s interpretation of the border between the voice driven song form and the expansive, extended 12? arrangement. It is informed equally by the soundtracks of John Carpenter, as much as the vastness and sheen of Trevor Horn.
INHALT wrote and produced the EP in their own Bunker Studio in San Francisco. The A side was mixed by INHALT in San Francisco, while Side B was mixed with the help of Werner Freistätter in Türnitz, Austria. Paul Lavigne mastered the EP in London, England at Walls of Sound and George Horn put the final EQ curve at Fantasy Studios, Berkeley. Each EP is housed in a specially designed jacket by Leo Merz and includes a lyric sheet.