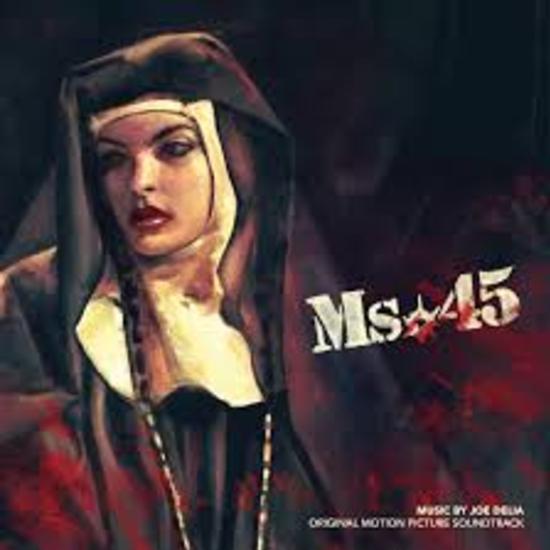 Like Abel Ferrara, Death Waltz Recording Company are not prone to shying away from the more extreme corners of culture, and are delighted to be presenting a true underground classic for the first time ever. Ferrara’s pictures often tread the line between grindhouse trash and art-films with insightful social commentary – and unflinching realism – and MS. 45 is his most notorious film, with much of its power coming from Joe Delia’s grimy yet haunting music. A sparse piano motif initially creates a lonely voice for the (mute) heroine but it’s overshadowed by wailing trumpet, electric guitar, and menacing synths that paint a disturbing musical picture of the world she inhabits.

Delia’s music is so great at creating a vivid image in your head and you begin to imagine the grubby streets, the sleazy sex-shops, the leering onlookers, with it building and building until it reaches sensory assault. The instruments sound as violent as the acts on screen, as loud synth stings ring out like gunshots, edgy jazz beats unnerve you, and a repeating brass motif becomes a theme for violence and vengeance – even during the awesome ‘Dance Party’. You may need a shower after listening, but you’ll be right back to play it again and again

Incredibly this soundtrack has NEVER been released in any format, we went back to the original master tapes and worked with composer Joe Delia to clean up the original elements .