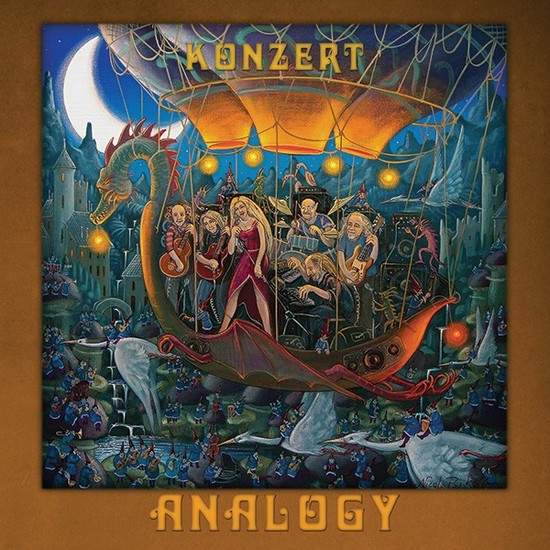 2012 was, among others, the year of the Analogy reunion, historical Italian progressive – and psychedelic too! – rock band, who just released a 7" and an eponymous LP, today an extremely rare item searched by collectors worldwide. Part of the original line-up then moved to England, where they were reborn as Earthbound.

Forty years after that unforgettable debut – it’s almost impossible not to mention the album cover photo, with the entire line-up photographed naked in a meadow – the band has reformed and started playing live again: “Konzert”, a deliberately chosen German title, it’s – oddly enough – their very first live album, recorded on April 14th 2012 in Lamezia Terme (CZ), Italy, and collects songs both by Analogy and Earthbound.

The sound is crisp and the band is in a great shape: together with original members Martin Thurn-Mithoff (guitar, vocals) and Jutta Taylor-Nienhaus (vocals), Analogy today gather Mauro Rattaggi (bass guitar) – the ‘6th element’, who left the band before the first LP release in 1972 and whose presence was hidden by the blue strip on the cover -, Richard Brett (bass and acoustic guitar), Scott Hunter (drums) – from Earthbound – and Roberto Carlotto a.k.a. Hunka Munka playing keyboards, who enriches and thickens the sound. This, adding the beautiful cover painting made by the historical ex-keyboardist Nicola Pankoff, make “Konzert” a must-have for any Italian progressive rock lover!